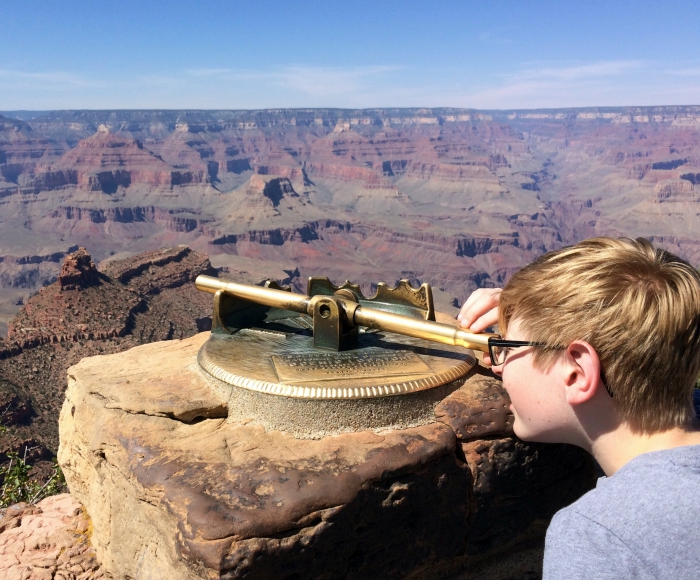 Grand Canyon Wonders: Above and Below

Warning: You might read this blog post and think we are the worst adventurers ever, and that’s okay.

It makes me a little sad to be writing about the Grand Canyon National Park because that means I am coming close to the end of our Birdy Goes West journey–we had made it as far west as were were going and had started the drive back to Missouri.

The Grand Canyon was the last big stop of our trip….and it was pretty BIG. 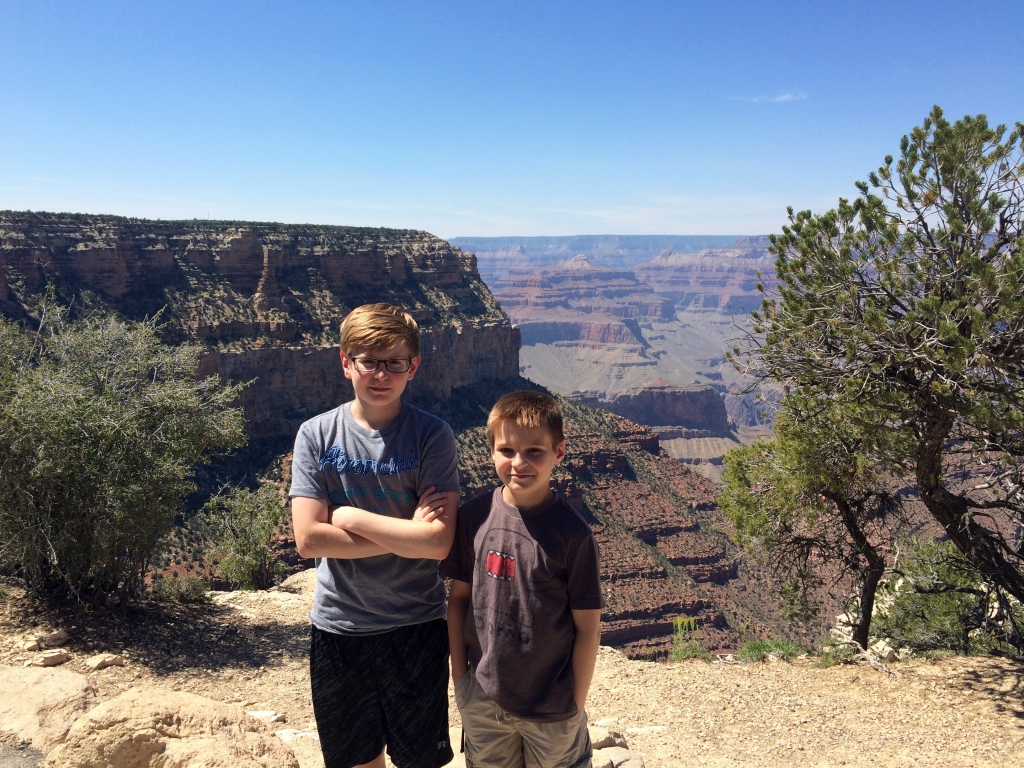 I’d like to tell you we did a scenic hike at the Grand Canyon and really got to the heart of the park. But, honestly, my friends, we were pooped. It was our 20th day on the road on a trip that had included some amazing places (Santa Fe, Sedona, Sequoia, Yosemite, and San Francisco). Though we were having the time of our lives, we had traveled at a hectic pace for three weeks and had worn ourselves out a little. Plus, there was this: 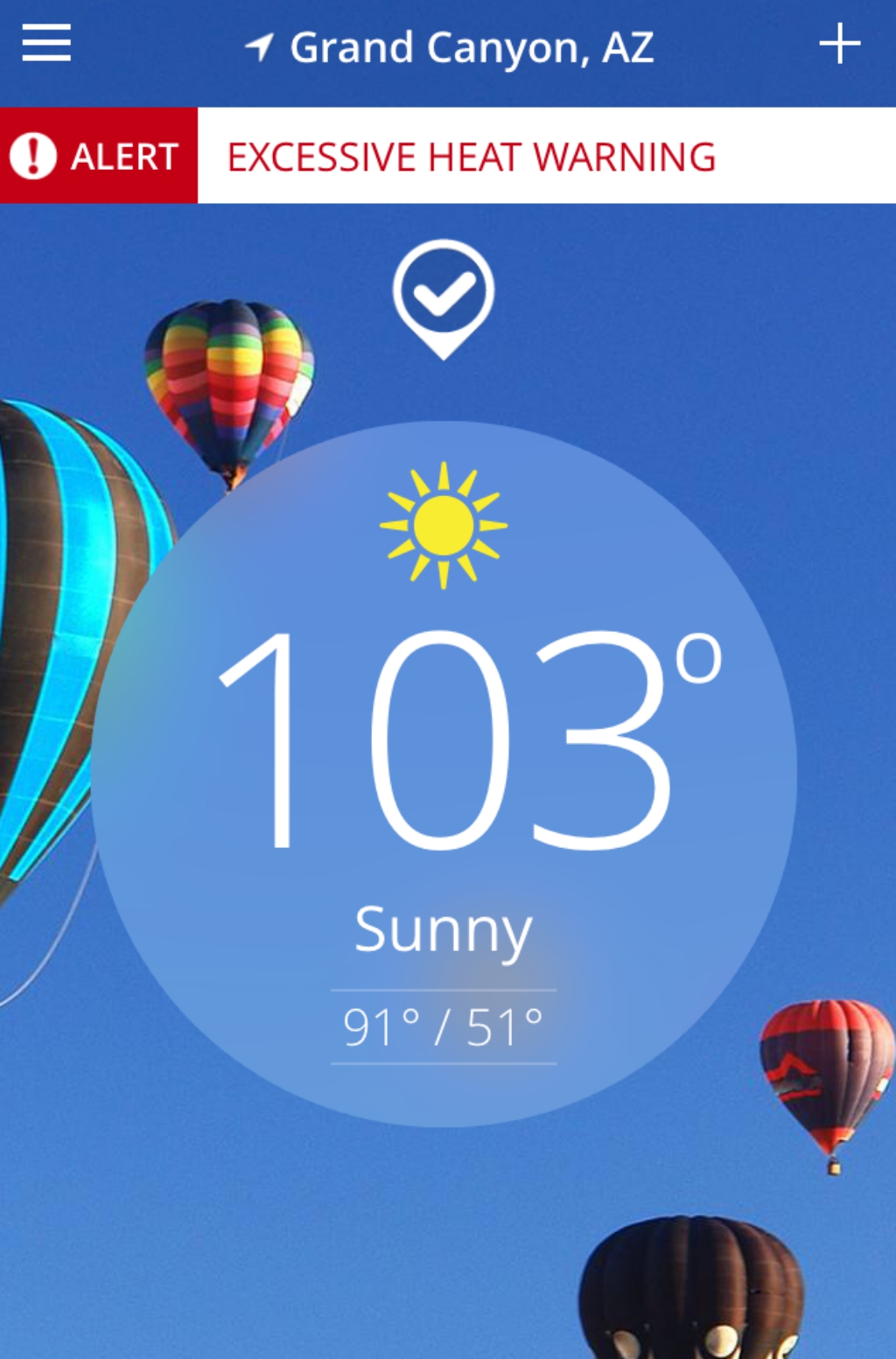 We were hot and tired. So, instead of exploring the Grand Canyon trails, we made a path to the nearest McDonalds and enjoyed some ice cream and WiFi.  We.are.the.worst. 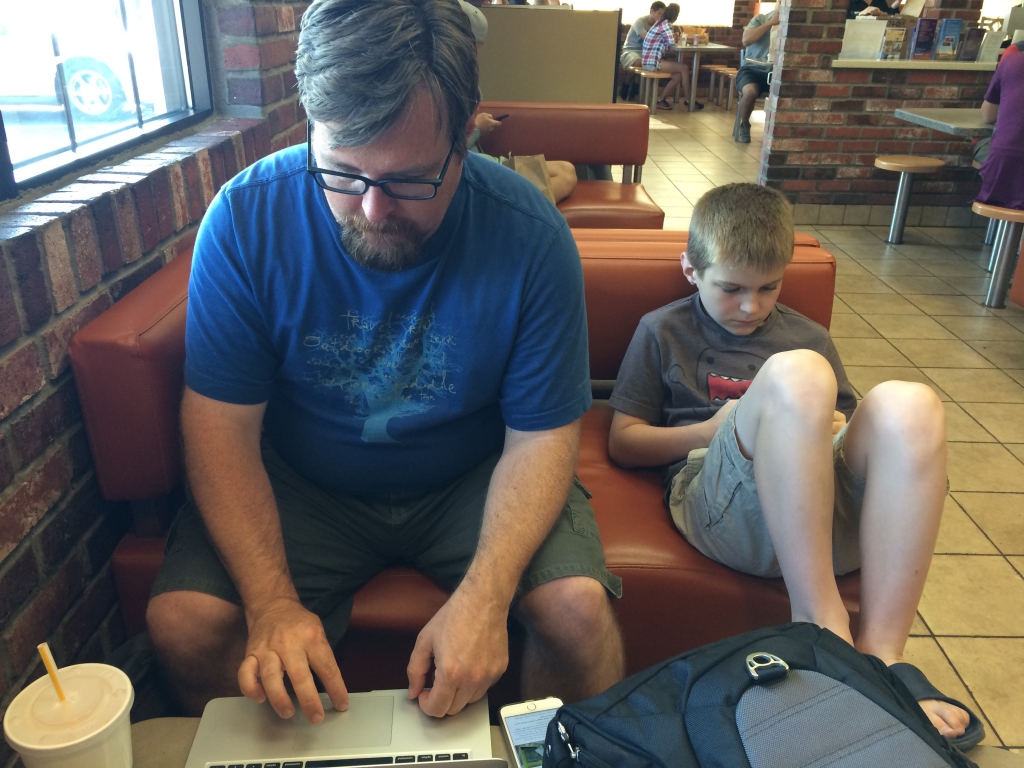 Of course, we didn’t spend our entire time at McDonalds instead of at the canyon. We made our way to the canyon rim several times during the two days we had at the park.

In addition to the geographic grandness of the canyon, the views are impressive because of all of the layers and colors. Your eyes can’t quite compute the immensity of what you are looking at. 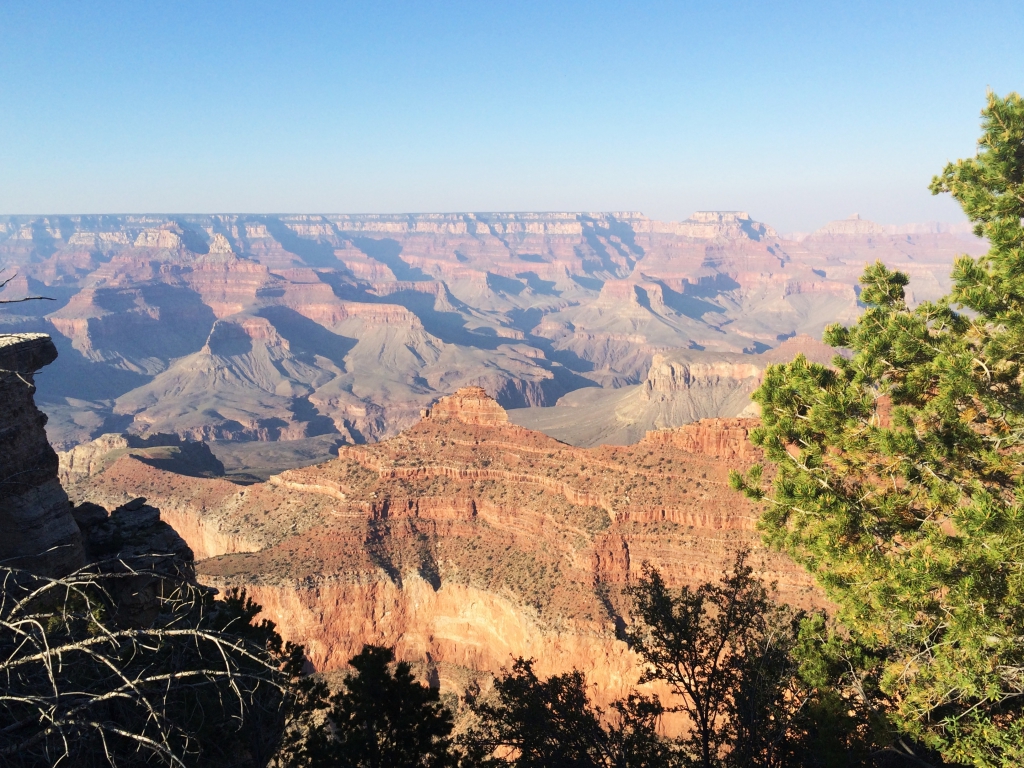 We visited the canyon at a few different times of day, and it was intriguing to see how the light and landscaped intertwined to create a new picture each time. I have never seen a landscape with so many layers like the canyon walls in the distance here: 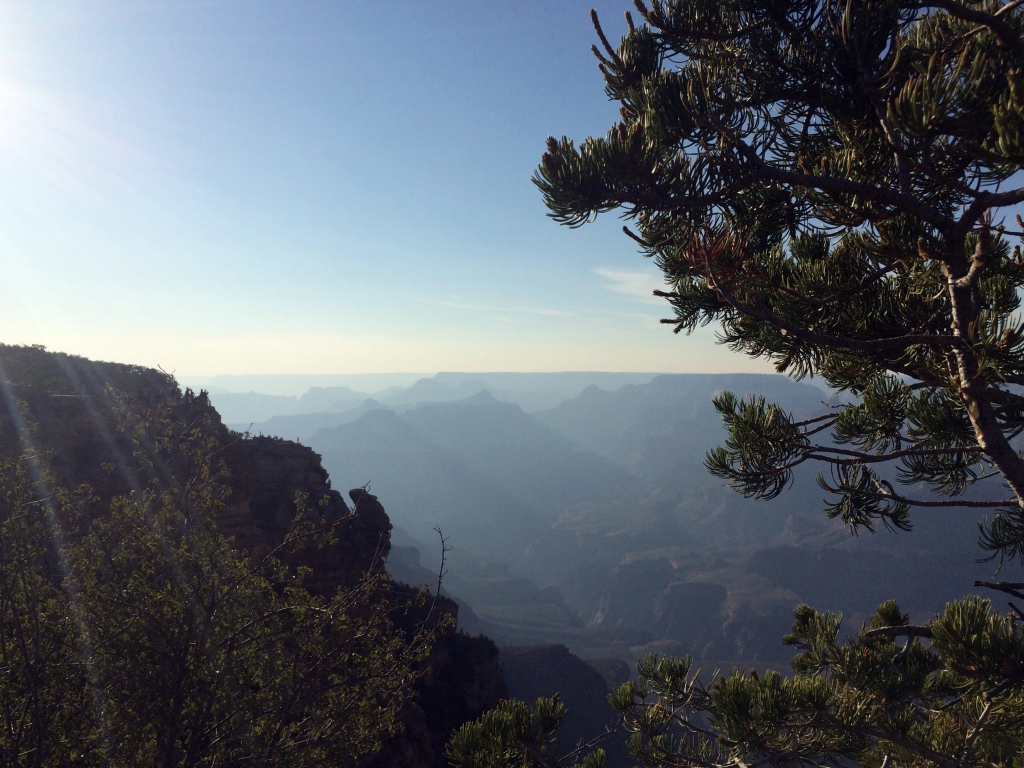 The best time to see the canyon is at sunset. The light begins to hit the immense canyon walls, giving them a technicolor glow. It is quite an impressive show. 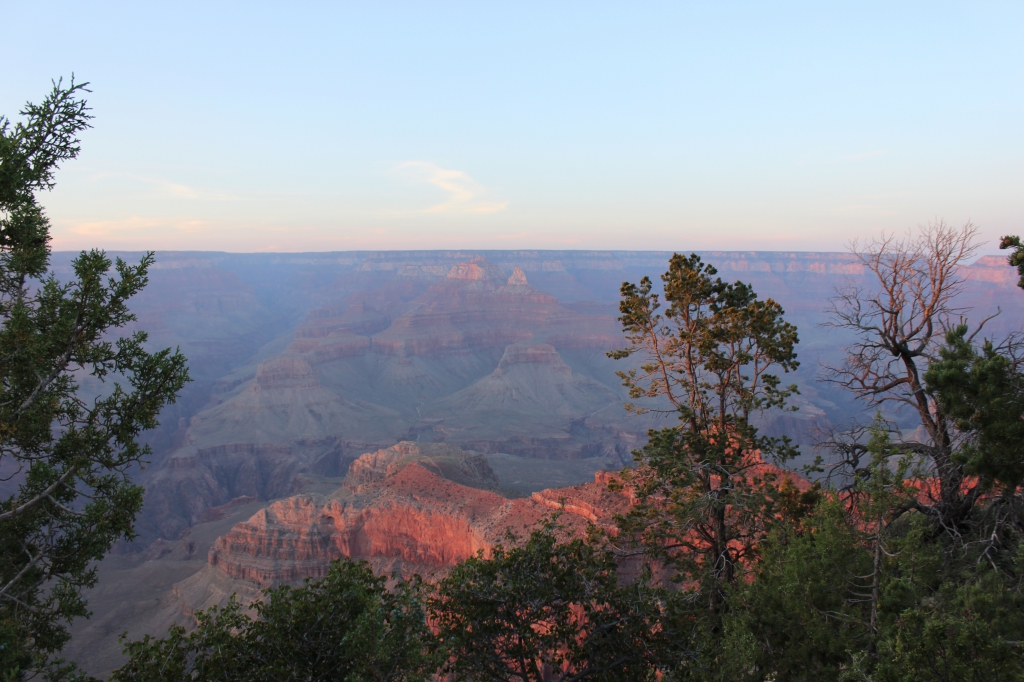 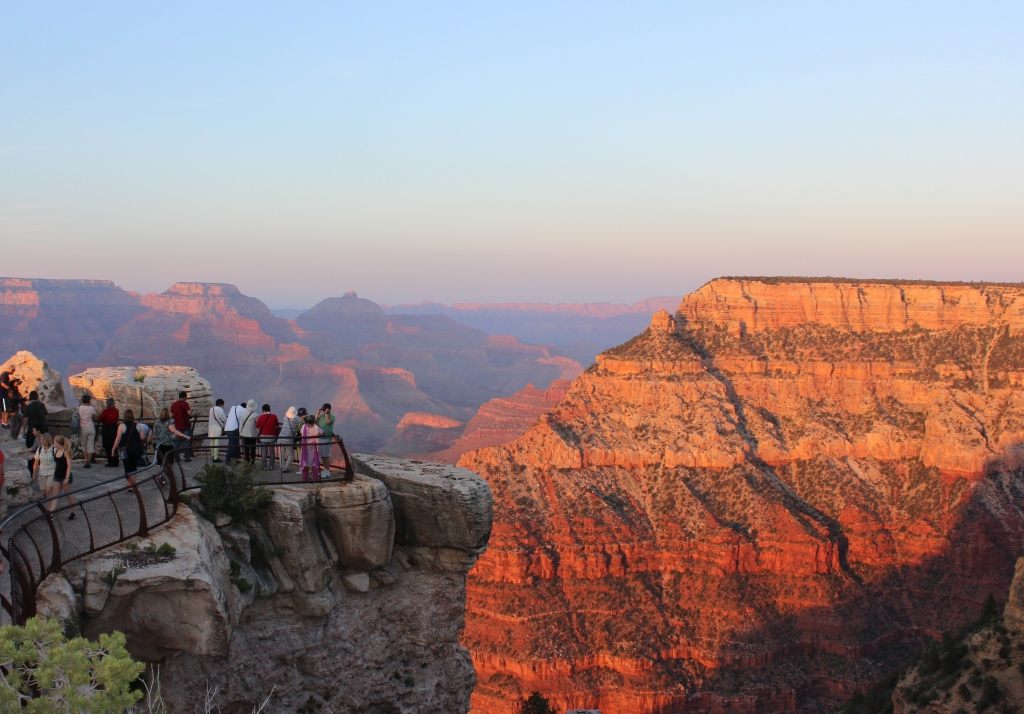 As you can see, we enjoyed these spectacular views with a few of our closest friends. While the crowds do take away from the chance to experience nature, there is also something cool about the fact that people from all over the world gather here, and we were a part of it. We were watching the sun set over the Grand Canyon on the day before the Summer Solstice, the longest day of the year. 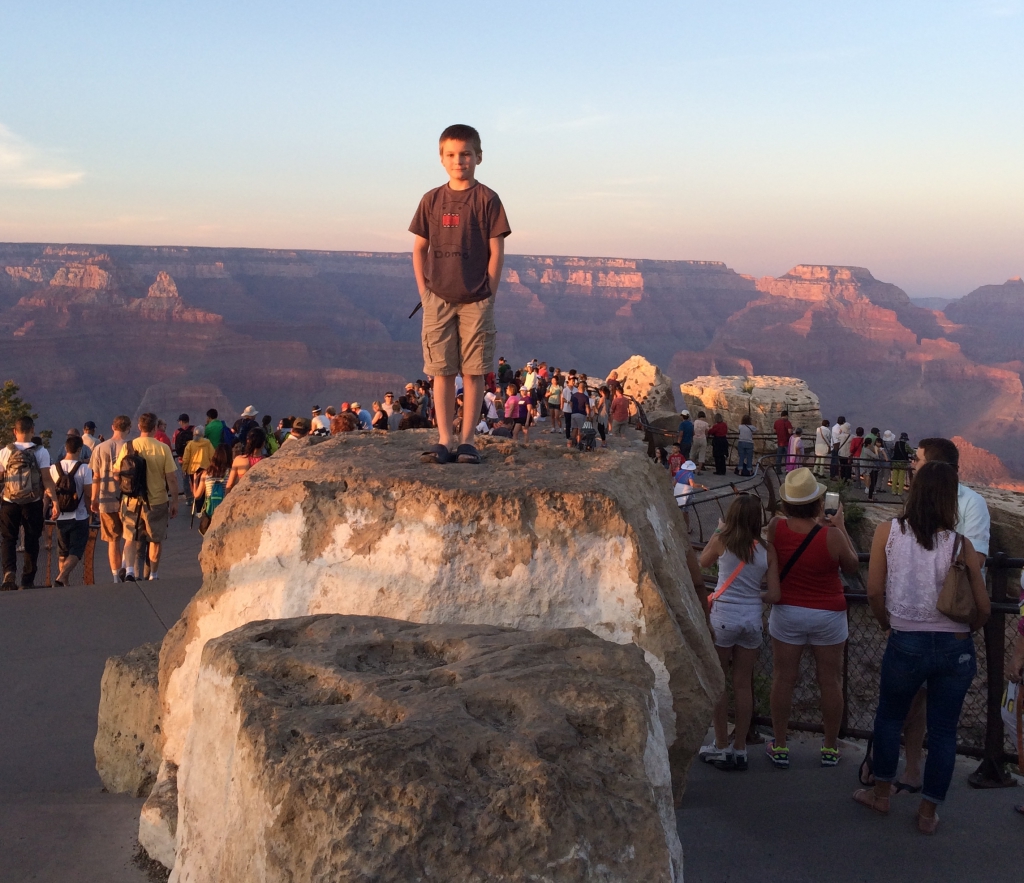 Look closely in the photo below to see the outlines of the crowds all along the rim. Though there were hundreds of people at each viewing spot, the sunset still managed to be bigger than the crowds. 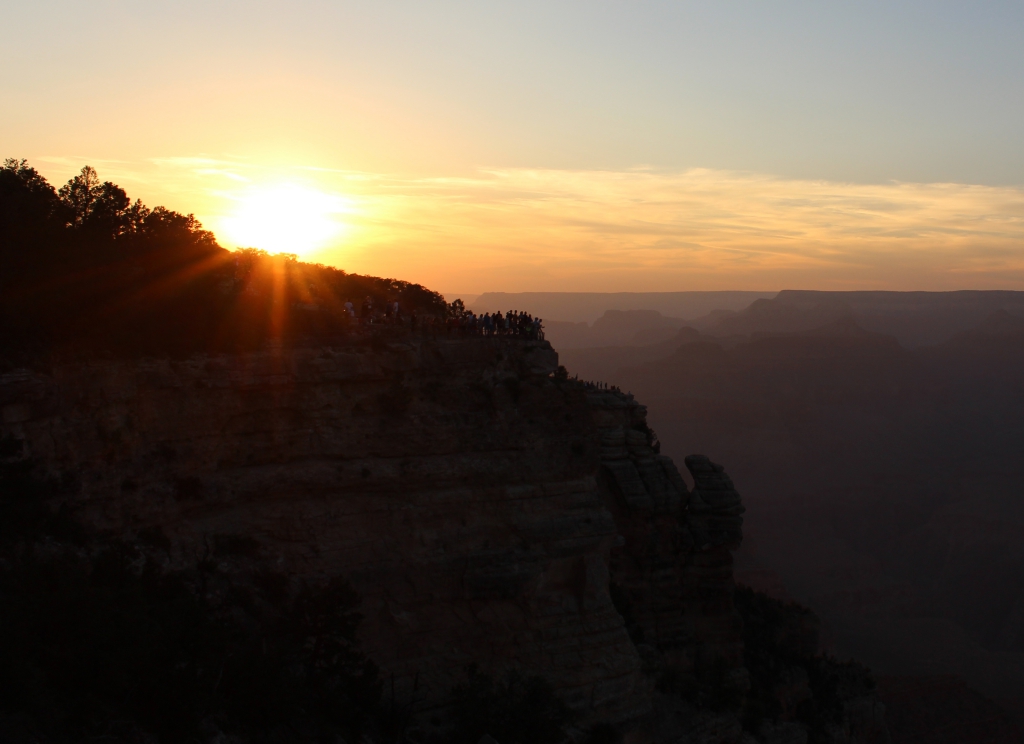 The canyon and the light continued their dance until the sun eventually dipped below the horizon. Then, the canyon walls quieted back to their darkened shadows, and the sky put on its showiest colors. 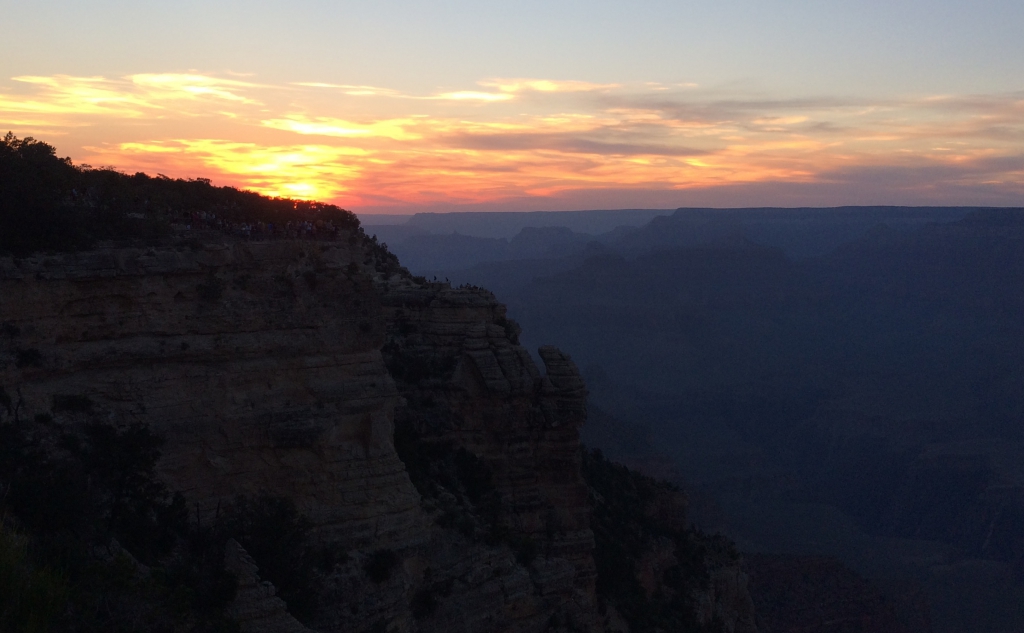 Though we hadn’t explored much of the Grand Canyon, I’m glad we saw it. If we had had better weather and more time, we definitely would have hiked or biked some trails. Despite our lack of exploration, watching the sun set over the Grand Canyon is truly an experience our family won’t forget.

Many people don’t realize it is also possible to enjoy the Grand Canyon after sunset thanks to the annual Star Party. We had no idea how cool this would be when we planned our trip, and we are so thankful we landed at the park during this event because it ended up being our boys’ favorite part.

Each year, amateur astronomers bring their massive telescopes to the park and share them with the crowds who come to peer at skies above. How kind of them! We arrived a little bit before dusk and waiting for the main show to begin. Some of the telescopes are so big, we had to climb up step ladders to catch a peek. 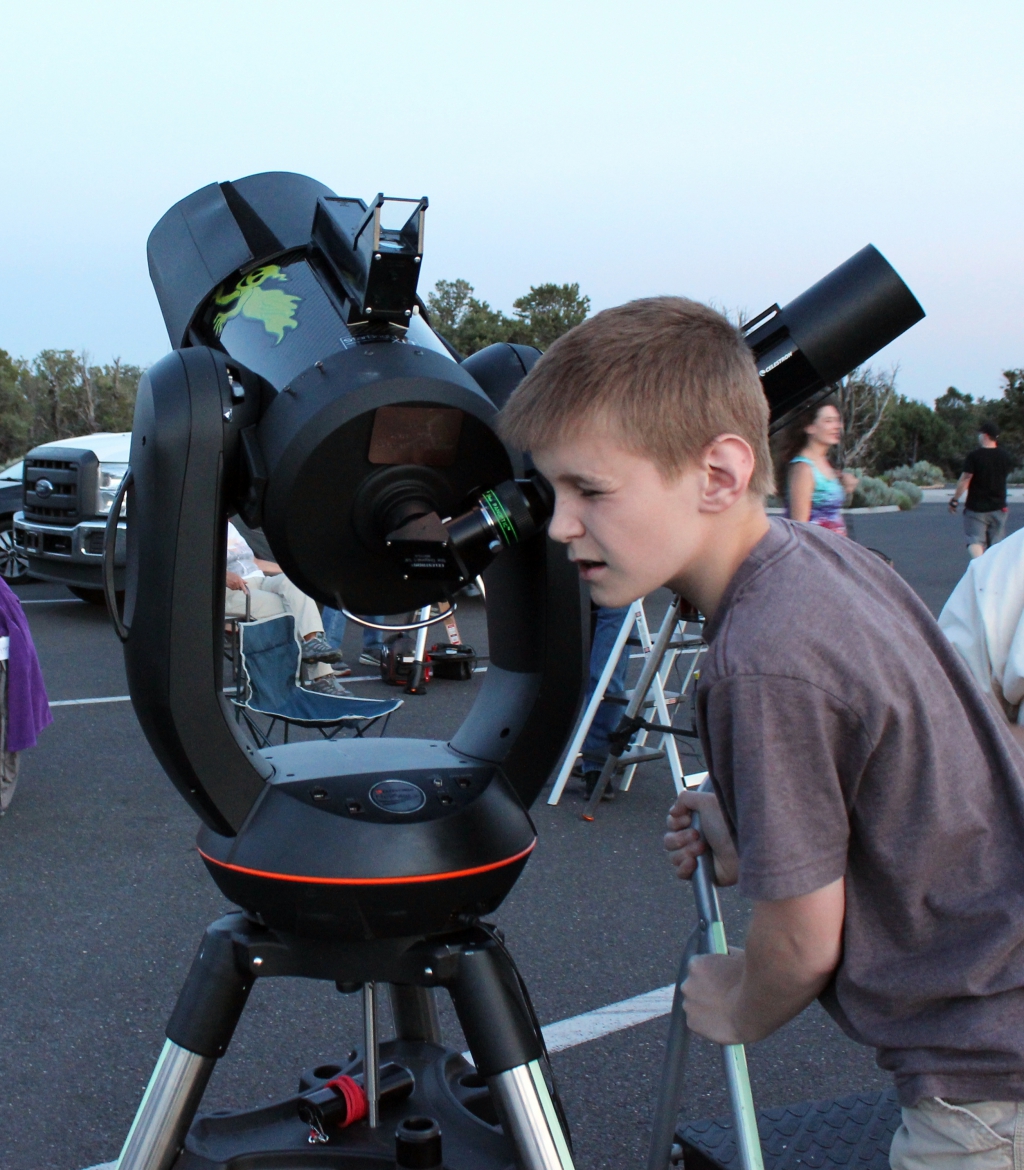 We were able to see the haze of a galaxy, the texture of the moon, spots on the sun, and a planet or two. Though we had seen the rings of Saturn in photos in books, to look through a telescope and *actually* see the rings is a whole different experience. 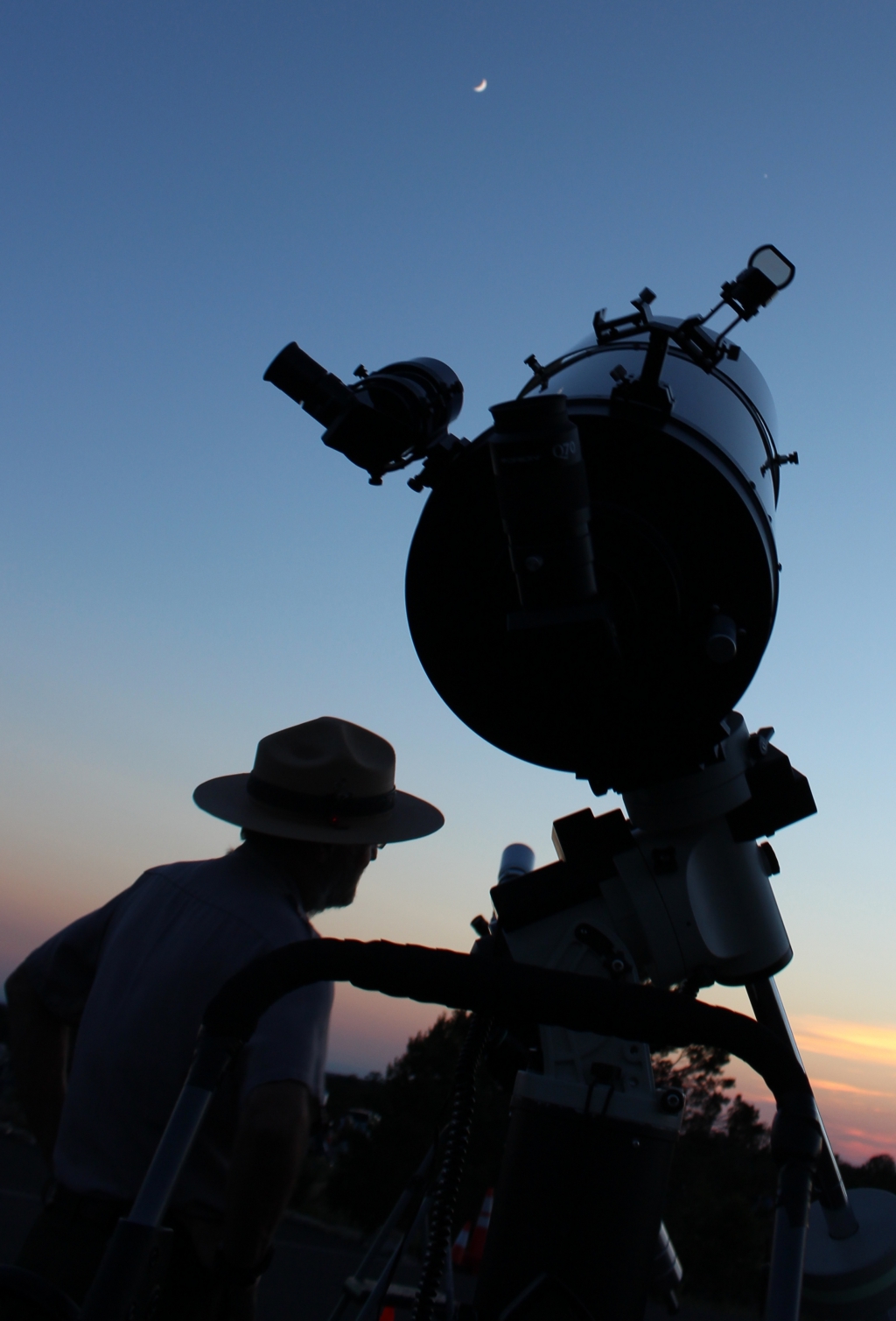 We also went on a constellation walk and heard many stories different cultures have told about the patterns in the stars above. It is always humbling to think about how many billions of people have shared the same curiosity about the night sky. From all over the world, throughout time, the stars above have remained the same.

Og Mandino said, “I will love the light for it shows me the way, yet I will endure the darkness because it shows me the stars.” Our family had endured some darkness in recent years, due to the death of my mother, and yet, this darkness makes us appreciate the speckles of light so much more. This whole journey was about finding that light. 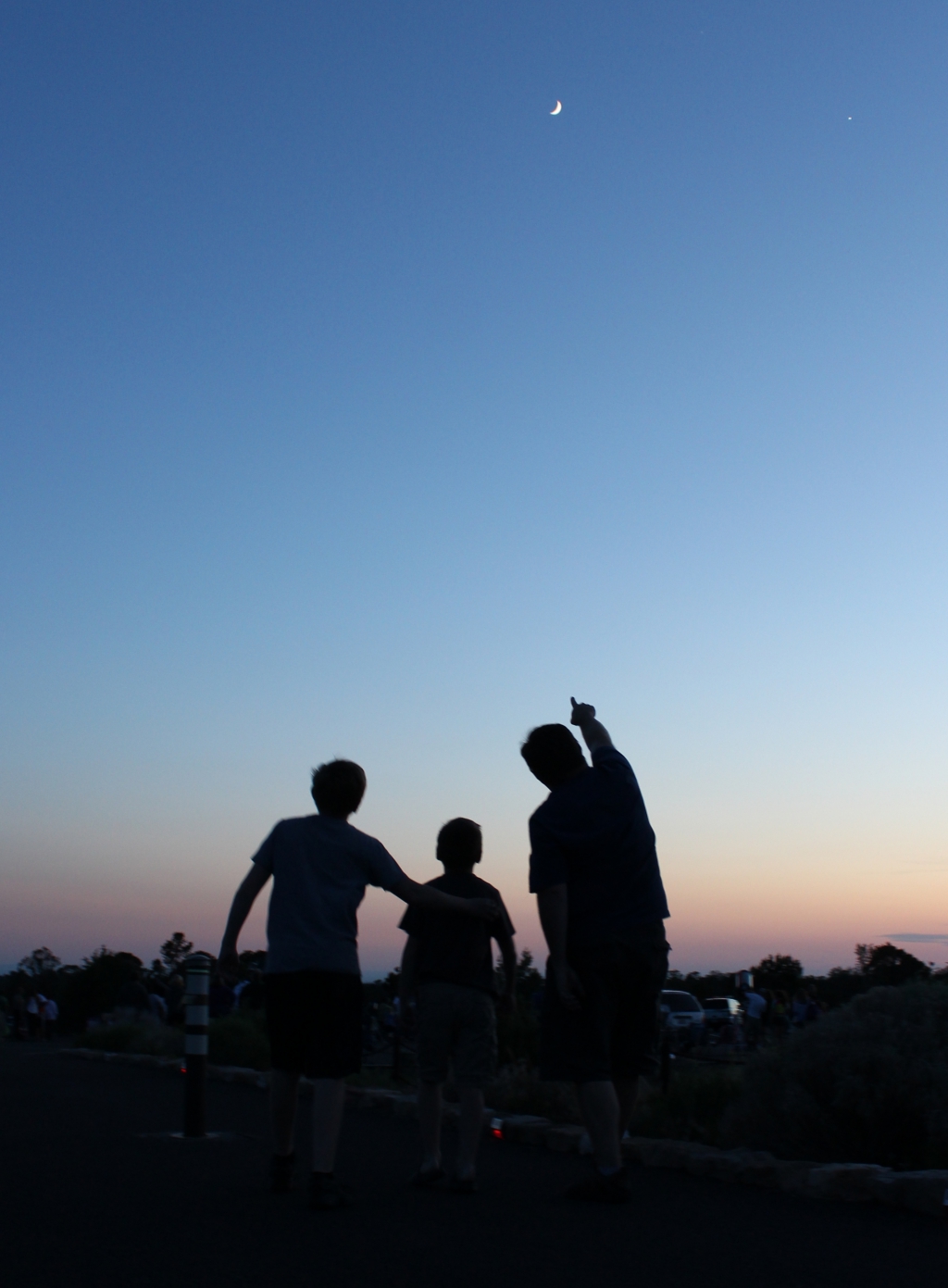 The Grand Canyon was grand, but the night sky was even grander.

Arizona can stay hot long into September… We did the Grand Canyon last September and the hikes were pretty warm. We took the short hikes. I loved fillin up our water bottles at the Parks free water stations! Your photos are lovely.

Thanks! We definitely wish we could have hiked to see more of the landscape, but we still enjoyed our time there.

Glad you approve! Our boys did, too! 🙂 They were a little tired of hiking anywhere by this point.

Sunset over the Grand Canyon and the seeing the stars! What a wonderful experience for your family!

It truly was a memory for a lifetime!

Thank you for sharing the “Canyon” with our next generation, your kids. The Canyon has been very special in our lives. We were married on the North Rim, have hiked over a hundred miles down and up each of the trail heads, rafted 277 miles through the canyon…and still yearn to be embraced by the Canyon every year. Your post was well written and brought back many fond memories. Thank you!

What a fabulous story. We did not do the Canyon justice with our visit and long to visit when the weather is cooler so we can get out in the middle of that beauty. We also didn’t make it to the North Rim on this trip. It’s a great excuse to return! Thank you so very much for your kind words.