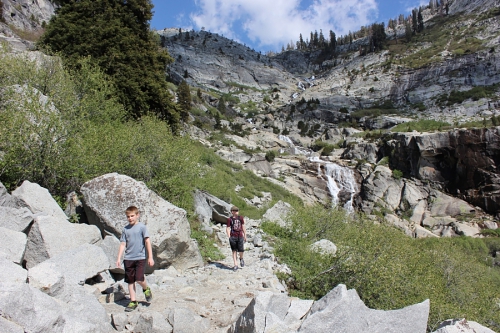 When people think of Sequoia National Park, they think of trees, but there’s much more to explore in this land of giants. To get a feel for the landscape of this national park, you must take a hike with your family. Our family did two hikes in Sequoia: Tokopah Falls and Moro Rock.

Our first day in Sequoia was a bit of a disappointment to me. I had expected Sequoia to be my favorite park because I heard it was like a cathedral of trees, a place where people spoke in a hush due to the majesty. I had also mistakenly imagined it having crisp mountain air and cool temperatures. Unfortunately, the temperature was in the 90s, the sun glared through the trees, and the crowds of people were anything but hushed.

We decided to take a hike and explore a quieter part of Sequoia. We chose to hike to Tokopah Falls since the payoff would be an up-close view of a 1200-foot waterfall, the largest in the park. We found the trailhead just north of the Lodgepole Campground. We took off over the river and through the woods… 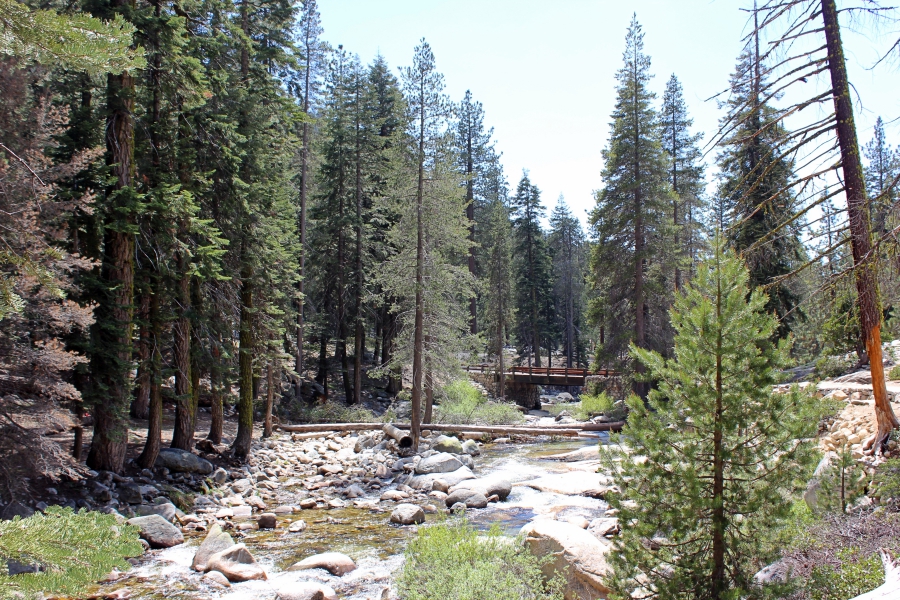 As we began our hike, we walked along the picturesque Marble Fork river. Large boulders, crystal clear water, and bright blue skies made a perfect trifecta.

We noticed the tent campsites strung along the bluffs over the river, and for half a second, I wished we were camping there instead of in Birdy, but that feeling didn’t last long as I remembered the many creature comforts that come with RVing (such as water, electricity, and AC, you know, those little things). Our RV park outside of the park provided all of those.

The trail eventually turned through a wooded section of tall pines. While these weren’t the infamous Giant Sequoias, they shaded our hike and smelled wonderfully. 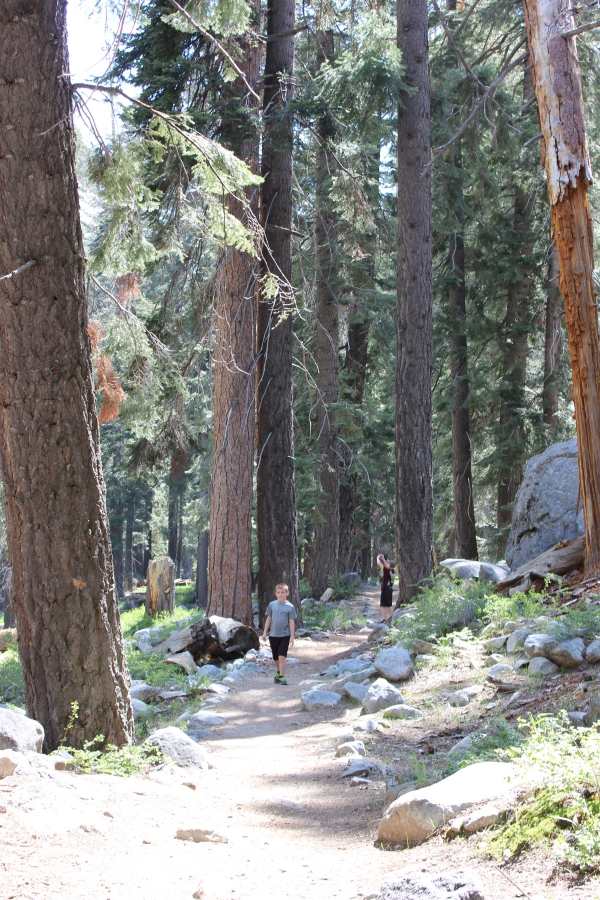 In a place like this, it’s easy to focus on the majesty of the grand scenes, but you should never overlook the tiny ones. These pinky-sized wildflowers stood out clearly against the earthy colors. 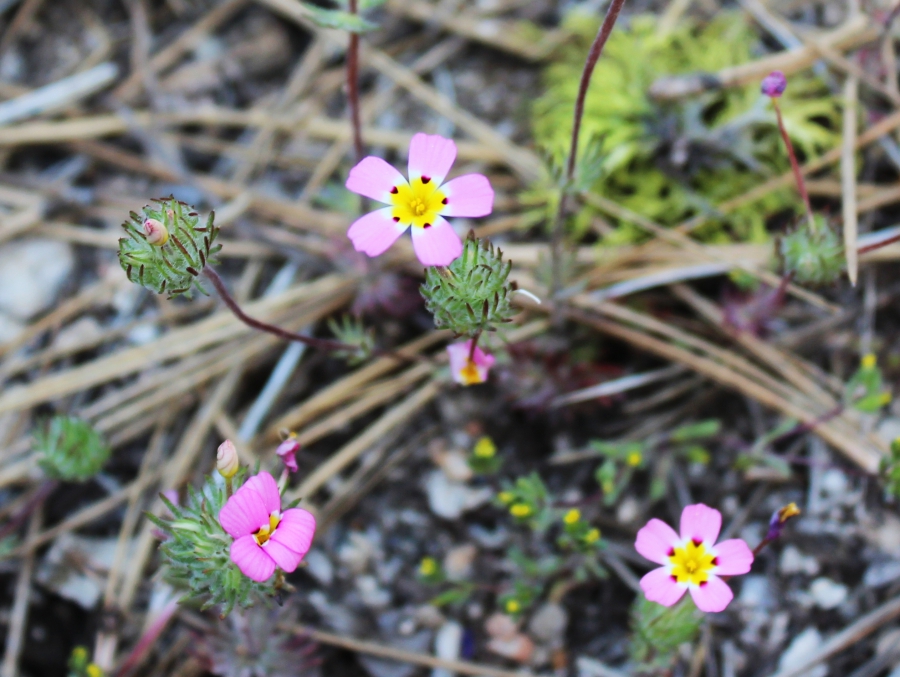 The trail to Tokopah Falls is mostly flat, but the ever-changing views made the hike interesting. We crossed over small trickles of streams (and some larger ones, too) flowing toward the Marble Fork. 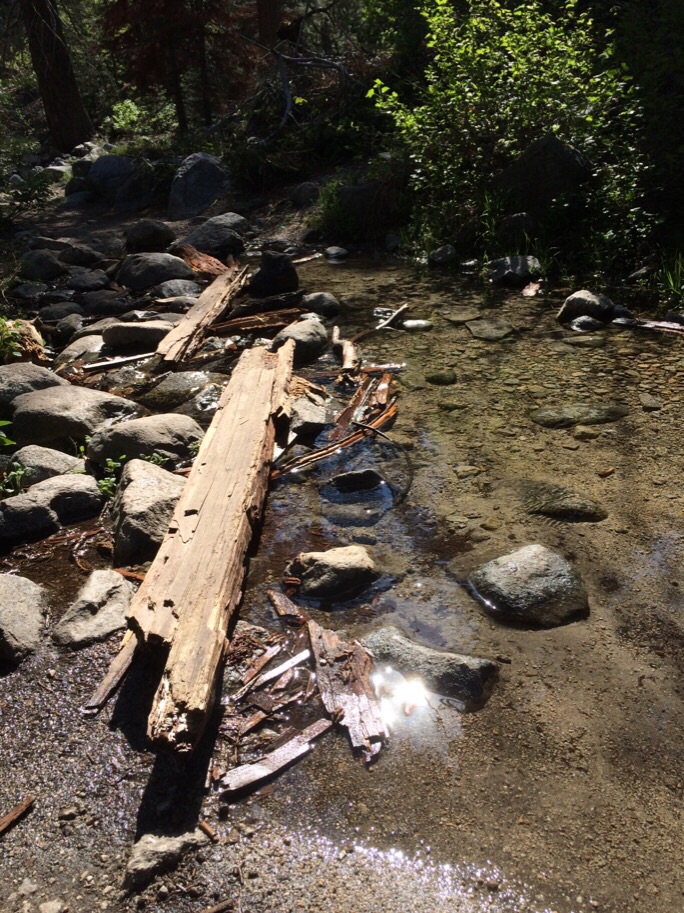 The boys enjoyed scrambling up some of the rock formations we encountered. And I enjoyed the fact that there were no big cliffs surrounding these rocks, so the boys could climb all they wanted. Real Life > Video Game! 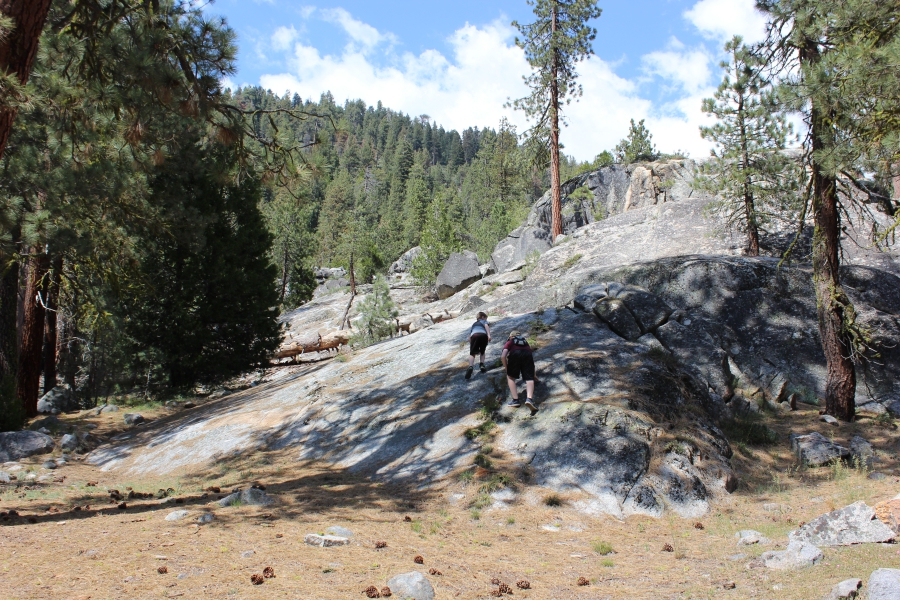 In the distance, you can see taller rocks. This trail offers exceptional views of the peak known as the Watchtower. I daresay this view rivals many of the vistas we later enjoyed in Yosemite.

Eventually, the trail went through a clearing where we caught our first sight of Tokopah Falls. From the distance, it’s a small sliver of a waterfall, but as you continue hiking toward it, it grows and you begin to appreciate its size.

Eventually, we reached the official end of the trail, but it was clear we could continue on through a rocky expanse to get a closer view of the falls. We climbed over and around the boulders. This was mostly a wide trail with no drop-offs; however, a couple sections required some careful walking. Our younger son was able to hike through with no problem, though. 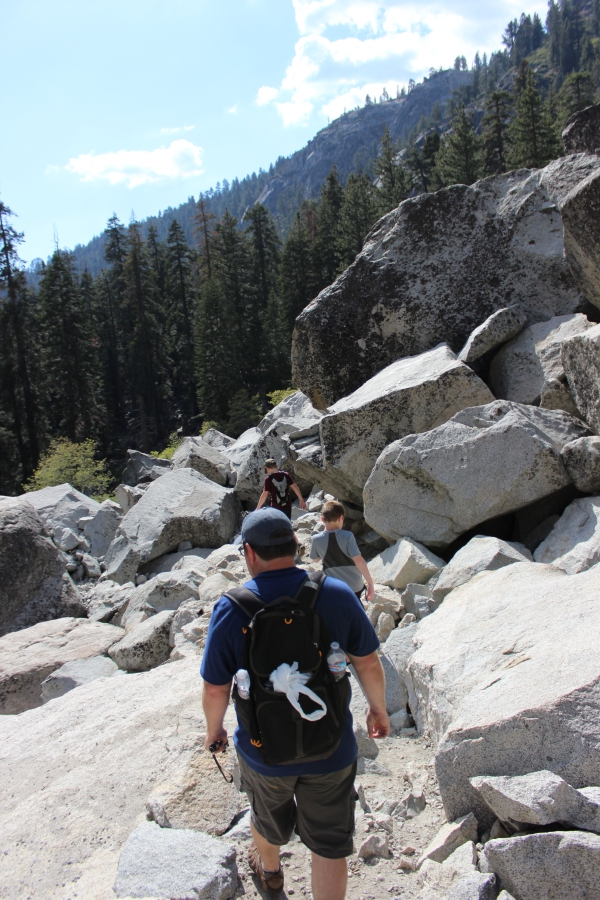 Finally, we reached the end of the trail for us. We were close enough to enjoy the power of Tokopah Falls as it crashed along the bluff. Since we were visiting in early June, the waterfalls were still flowing well from the melting of the winter’s snowpack.

I would show you a picture of the whole waterfall, but  it was hard to photograph due to the size and angle of the falls. You’ll just have to go see it for yourself.

It was a nice place to sit and enjoy the scenery…tall pines, a majestic waterfall, the granite peaks, and a rapidly-flowing river. 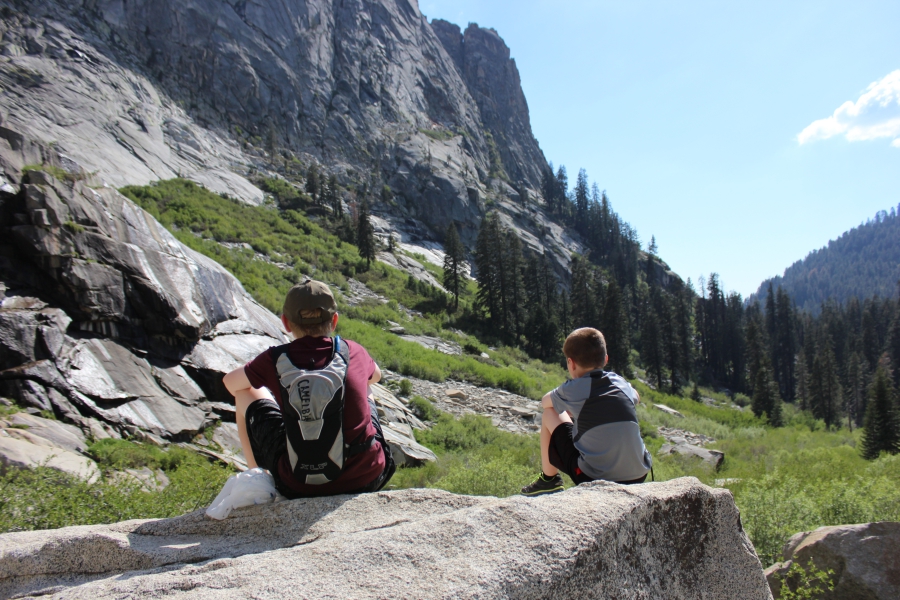 On our hike back, we were met by several adventurous marmots. These fellows sure were cute. They weren’t concerned about the signs warning of dangerous travel ahead.

Near the end, we went down to dip our feet in Marble Fork. We would have loved to have taken a swim, but many signs warn about the dangers of invisible currents in the rivers. It was, however, a nice place to soak our toes and rejuvenate ourselves for the rest of the hike. 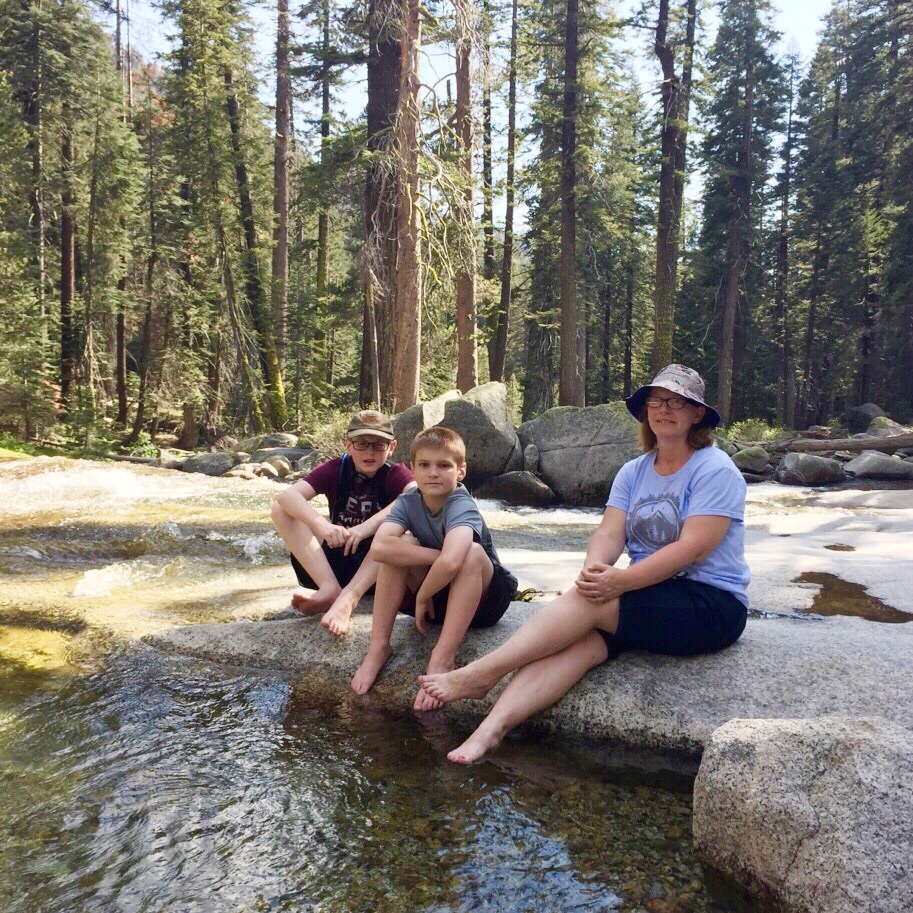 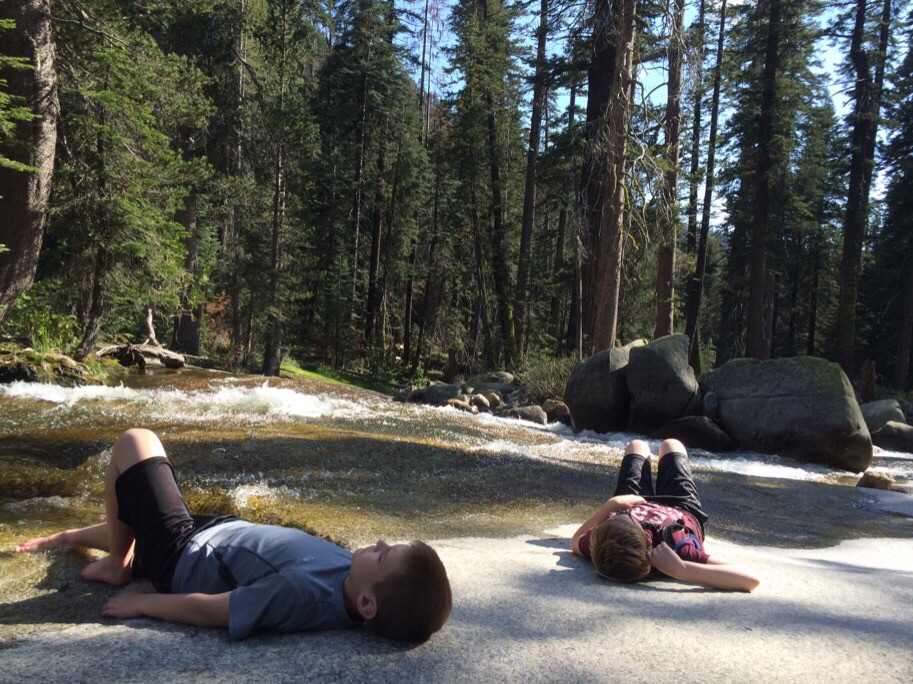 We continued on our way and finished the hike. Though we thought we were doing a 3.4 mile hike, it ended up being a total of 5 miles, making this the longest hike my boys had ever done. I was really proud of them. 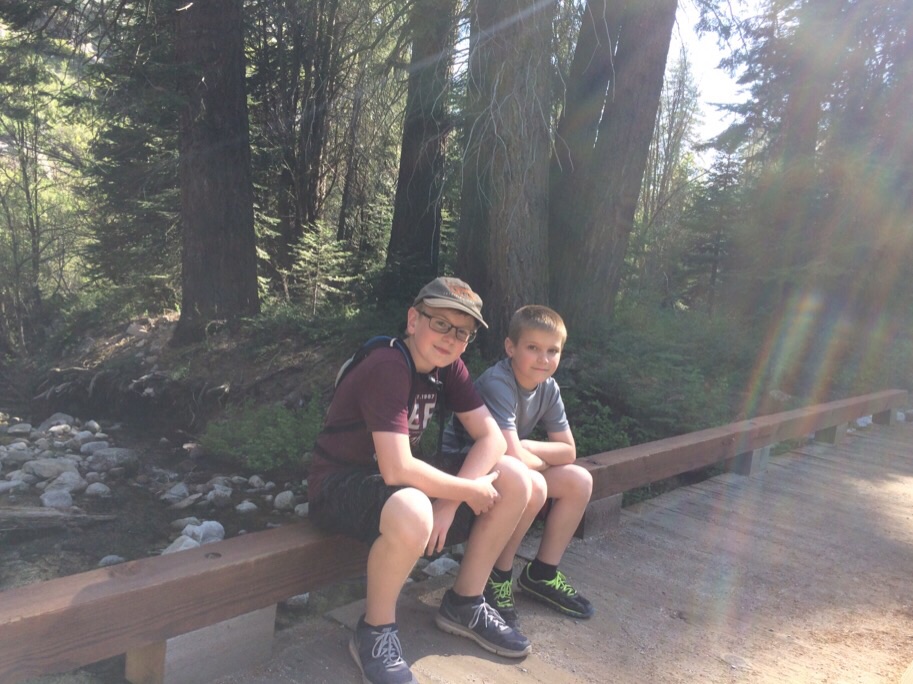 If your family makes it to Sequoia National Park, I highly recommend you take a couple of hours for the hike to Tokopah Falls. On a hot day, this shady trail keeps you cool, and the hike is easy enough for almost any family member to enjoy. Plus, the payoff is a spectacular view of a waterfall. It truly is a perfect family hike.