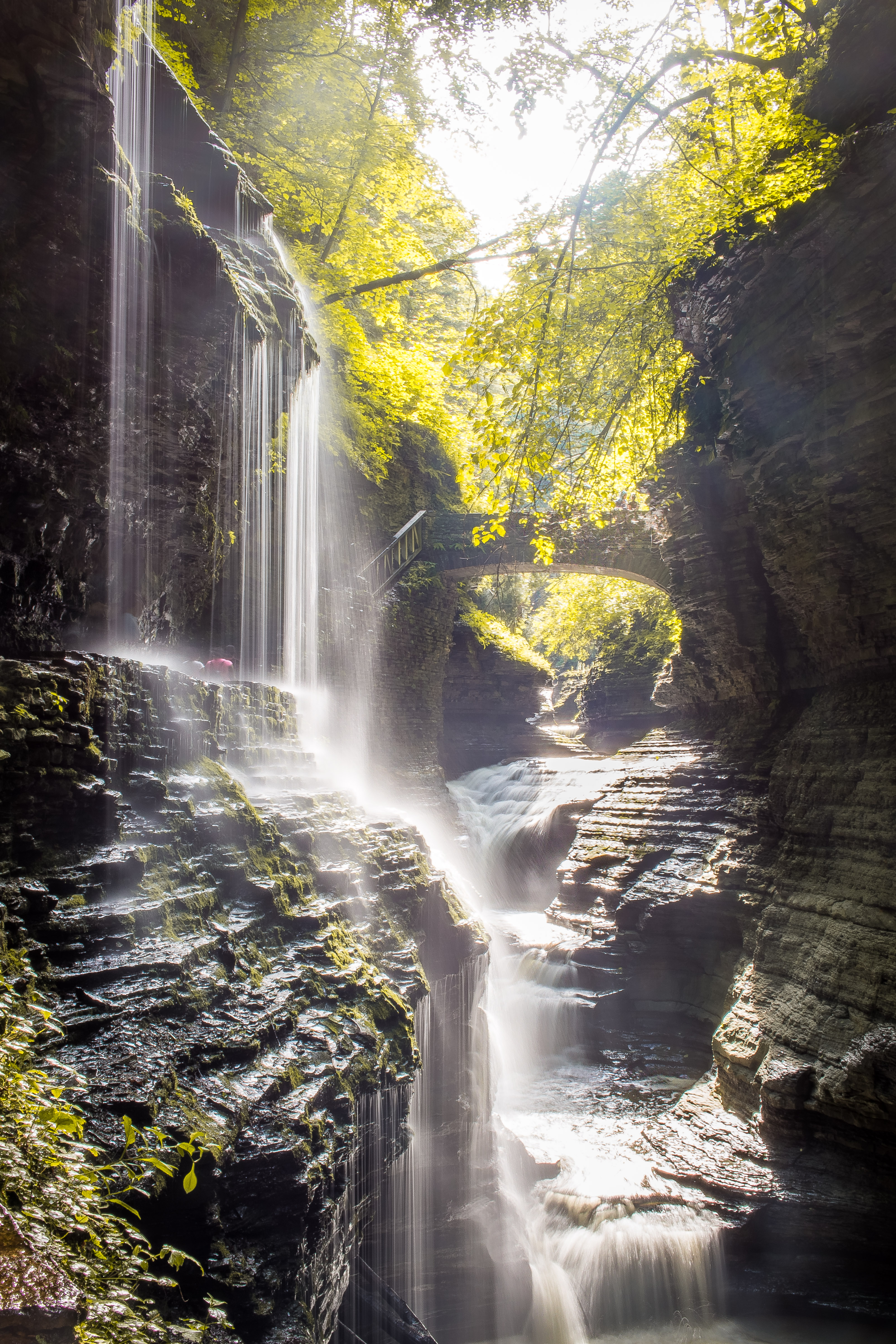 While browsing Pinterest one day way back when, I happened upon a photo of Watkins Glen State Park showing a waterfall trickling over a rocky ledge just beyond an epic stone bridge. While it looked like something straight out of a fairy tale, I soon discovered that this was a real place and instantly added it to my “must-see” list.

What I love about RVing is that our “must-see” list sometimes ends up becoming a actual itinerary. Such was the case with Watkins Glen. Our trip to Niagara Falls took us very close to the Finger Lakes region, so we opted to tack on a couple of days to see this fantasy landscape in person. It did not disappoint.

While Niagara Falls is a powerful force that demands admiration, the Finger Lakes waterfalls speak with a delicate whisper. Here, the magic doesn’t come from power, instead it comes from beauty. Of the many state parks found in this region, Watkins Glen is considered one of the most spectacular.

Watkins Glen State Park is located in New York’s Finger Lakes region. This area is known for the captivating beauty of the rolling green hills and the 11 long, skinny lakes. The same Ice Age glaciers that carved these cat-scratch gashes also left ridges in the rocks and earth, ridges that water would eventually flow over, creating some of America’s most magical waterfalls.

This amazing landscape has enchanted visitors for centuries. In 1863, visitors were first invited to purchase tickets to see the sights. It became a public park in 1906. While most people visit Watkins Glen to hike the trails, there are many other activities to be enjoyed there. The park has playgrounds, an Olympic-sized pool, picnic pavilions, a gift shop, and concessions. Plus, it offers a beautiful campground (check out my review here!). Due to our tight timeline, our family only had a chance to explore the GORGE-ous Gorge Trail.

The Gorge Trail is the most spectacular thing about Watkins Glen State Park. Over millennia, the Glen Creek carved a deep gash through a rocky hillside. Along a short, scenic section of this tiny canyon, the creek tumbles, drops, and cascades over 400 feet in elevation, creating 19 waterfalls of varying heights. The Gorge Trail takes you over, under, and around these amazing waterfalls.

On top of the visual beauty, there’s the sound of Glen Creek. At times, it is a tiny trickle drip, drip, dripping along the ridges. At other times, the gush of water fills the canyon. You might even catch a rainbow while walking under a waterfall.

Finally, there’s the man-made beauty on top of the scenic beauty. People often have a way of ruining nature when they build over it; however, at Watkins Glen, the man-made structures perfectly complement the natural surroundings. Many of these were built in the 1930s by the CCC. Since the bridges and pathways were constructed out of local stones, they appear to grow from the ground and hillsides naturally, which makes the landscape even more spellbinding.

You can enter the trail at the top or the bottom of the gorge. We decided to enter at the bottom (where the main entrance is located right in the village of Watkins Glen). We walked a mile up the trail to a point called the Mile Point Bridge before turning around and descending on the same path. Even though it was the same route, it appeared all new when seen from a different angle.

Our Reaction to Watkins Glen

Watkins Glen State Park is truly magical. I don’t know that we’ve ever experienced so much beauty on such a short trail. Even though we only walked a mile in, it took us forever because we kept stopping for photos. No matter how many I took, I never was able to wholly capture the Watkins Glen experience. Around every turn in the trail, there was a new scene to absorb and experience.

Have you ever seen a photo of a place and then arrived to be disappointed by the reality? I have. However, Watkins Glen State Park truly lived up to the beauty that caught my eye in the photo I saw on Pinterest. While Niagara Falls impressed us, Watkins Glen absolutely enchanted us.

[…] In my previous post, I described what attracted us to Watkins Glen State Park in the first place: the enchanting waterfalls. I saw one image on Pinterest and began dreaming of seeing this park in person. To find out there was a campground onsite was pure bliss. […]

Glaciers sure are good decorators, aren’t they?! Beautiful! We keep passing through New York state without having much time to stop and explore–must fix that!

They certainly are! This region of NY was SO very beautiful! I wish we could have stayed longer. Luckily, we will get to explore more of it next summer with a visit to Ithaca.

This was so helpful! I’ve been wanting to plan a trip to Watkins Glen, and you have all the info needed, including time to go and which trail to pick. Thanks!

Thank you! I am glad the post was helpful! It is such a beautiful park. I hope you have a lovely visit.