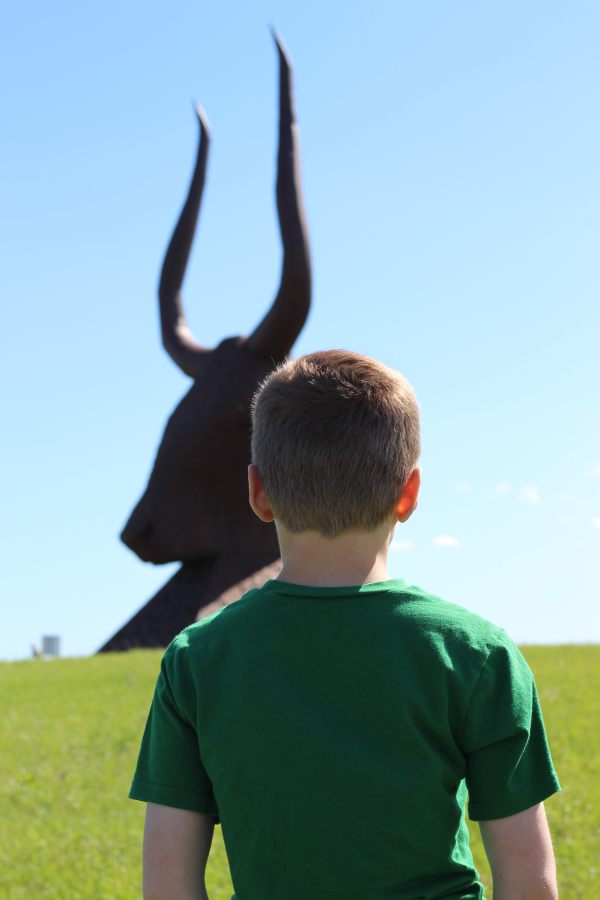 As we headed north skirting the border between Iowa and Nebraska, we were eagerly anticipating our arrival in Sioux Falls. There, we would make a 90-degree turn and begin trekking west. I knew the landscape would begin to look less and less like home.

Part of the fun of a road trip is hopping out of the car at stops along the way to explore new places and see beautiful, historic, or unusual sites. We decided to make a short day of driving on the second day of our road trip to allow plenty of time for roadside attractions along I-90 through eastern South Dakota.

Our first roadside stop of the day was Sioux Falls in Sioux Falls, SD. Originally, we weren’t sure that this would be worth a stop, but once we made the short drive off the interstate to Falls Park, we were really glad we did. Though the waterfalls aren’t tall, it is still a spectacular site to behold as the roaring water cascades along the distinctive pink quartzite rocks. 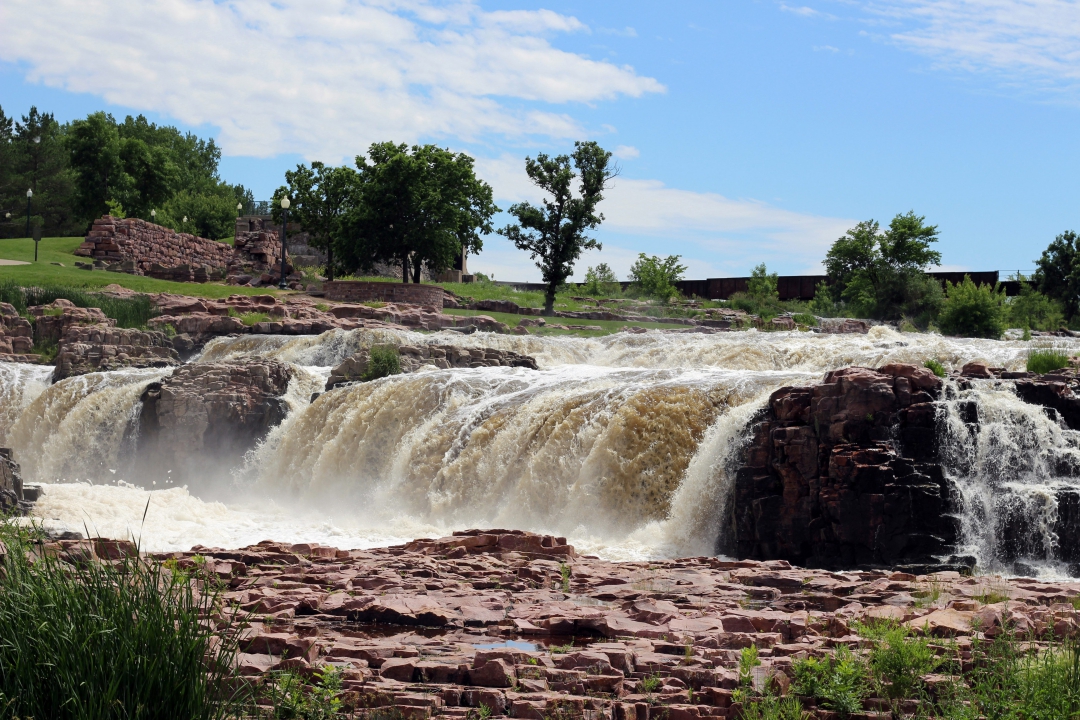 In the park, you’ll find a small cafe in a restored hydro electric plant, two statues, and a visitor’s center with an observation tower. 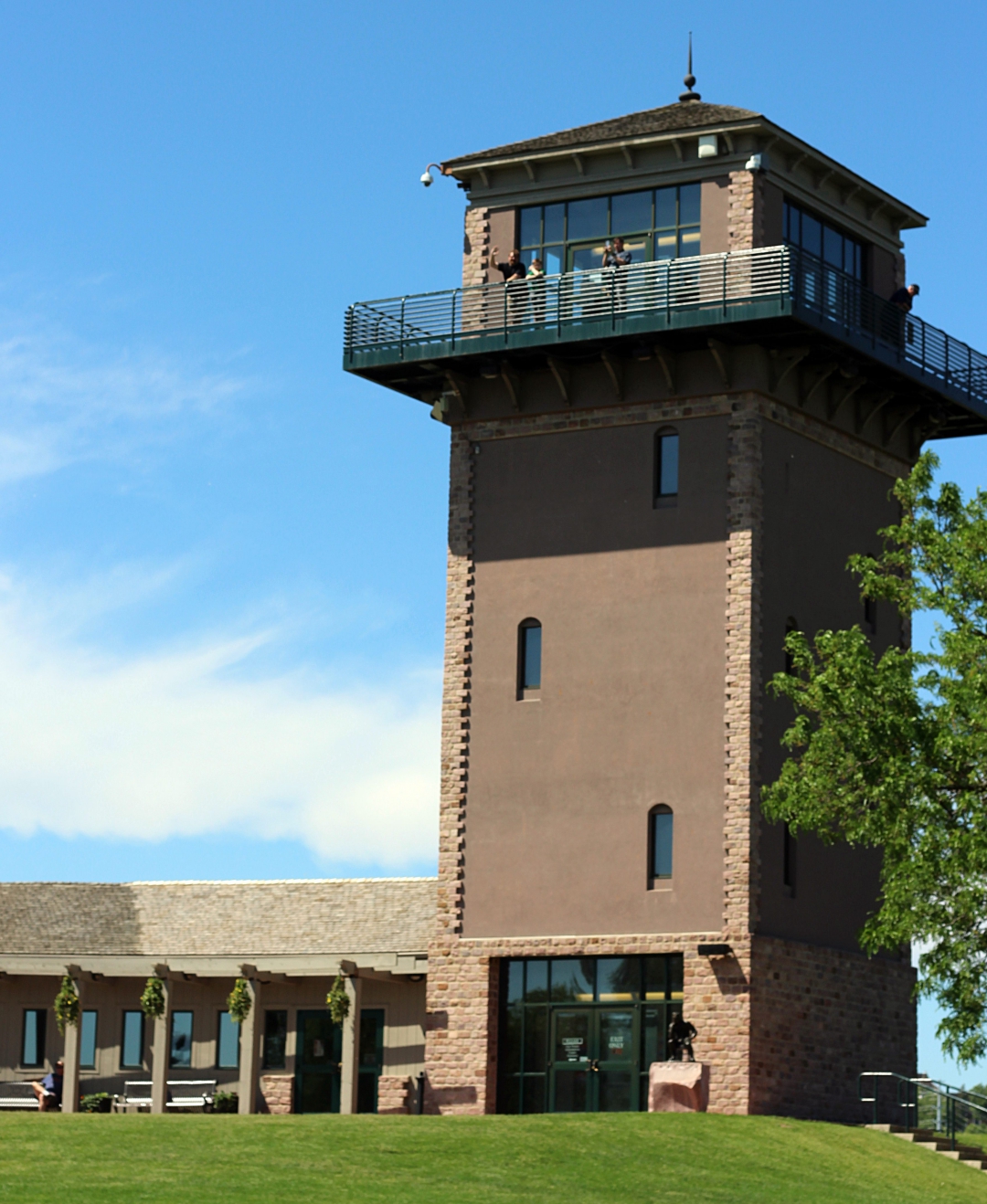 Climbing up the tower or riding the elevator is worth the effort for a bird’s eye view of the whole area. 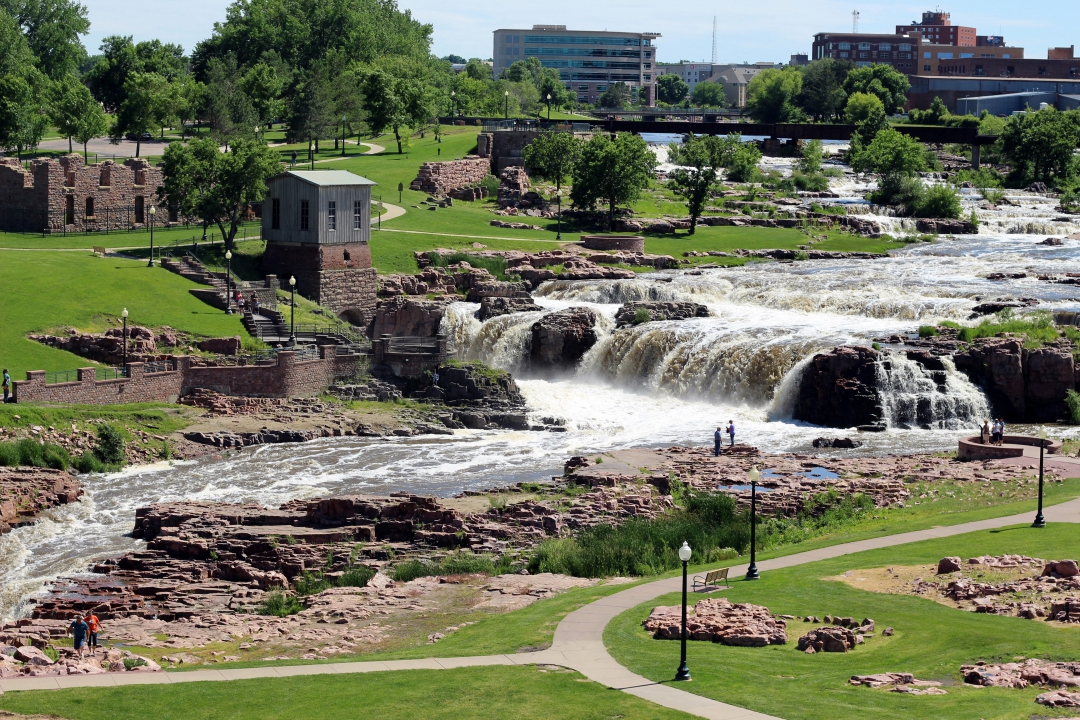 If you’re in the area, stop and behold the beautiful Sioux Falls. It’s only a few minutes off of the interstate, and it is free. Note: If you’re driving an RV to visit, RV parking is down below the park. We missed this fact and ended up in a very crowded parking lot without much room to turn around.

As we caught I-90 and began heading westward, the landscape seemed to suddenly turn into rolling green prairie. White puffy clouds danced in the sky above the fields of grass. Though lovely, there wasn’t much to look at…that is until our eyes spotted a huge set of horns looming on the horizon. 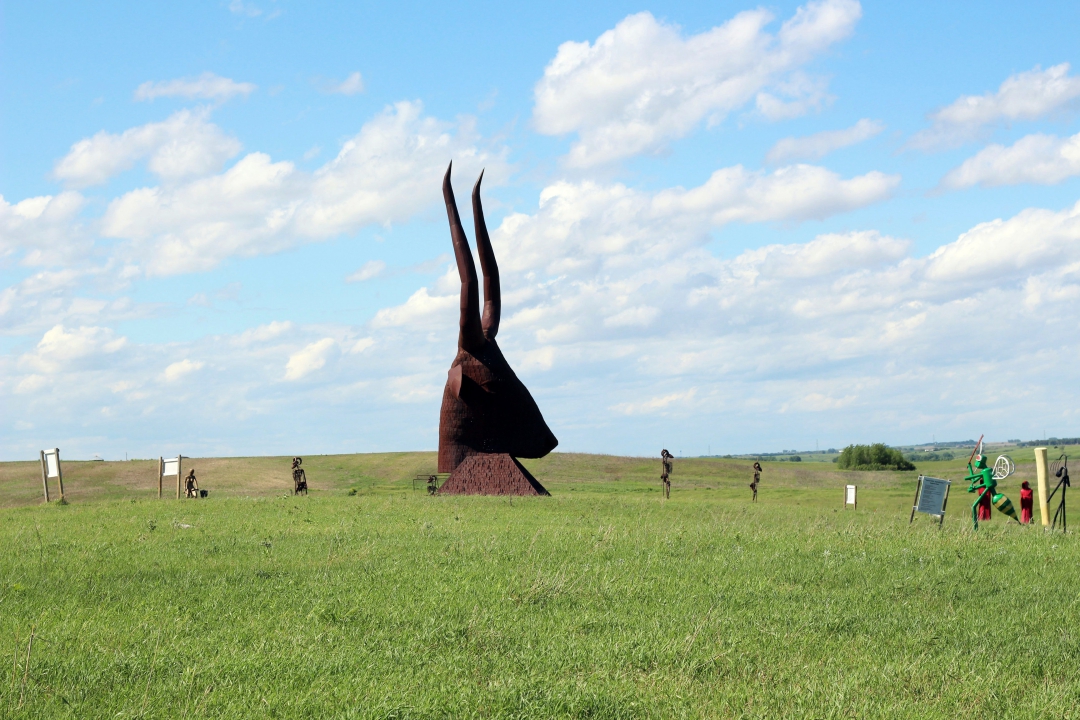 I suddenly realized we were coming to the Porter Sculpture Park, which I had read about. Located near the town of Montrose, this is a must-see roadside attraction. It is located just off the interstate and has plenty of room to accommodate RVs. The cost is $8 per adult, $4 for teens, and free for children under 12. We believe the fee is well worth it since you are directly supporting an artist. 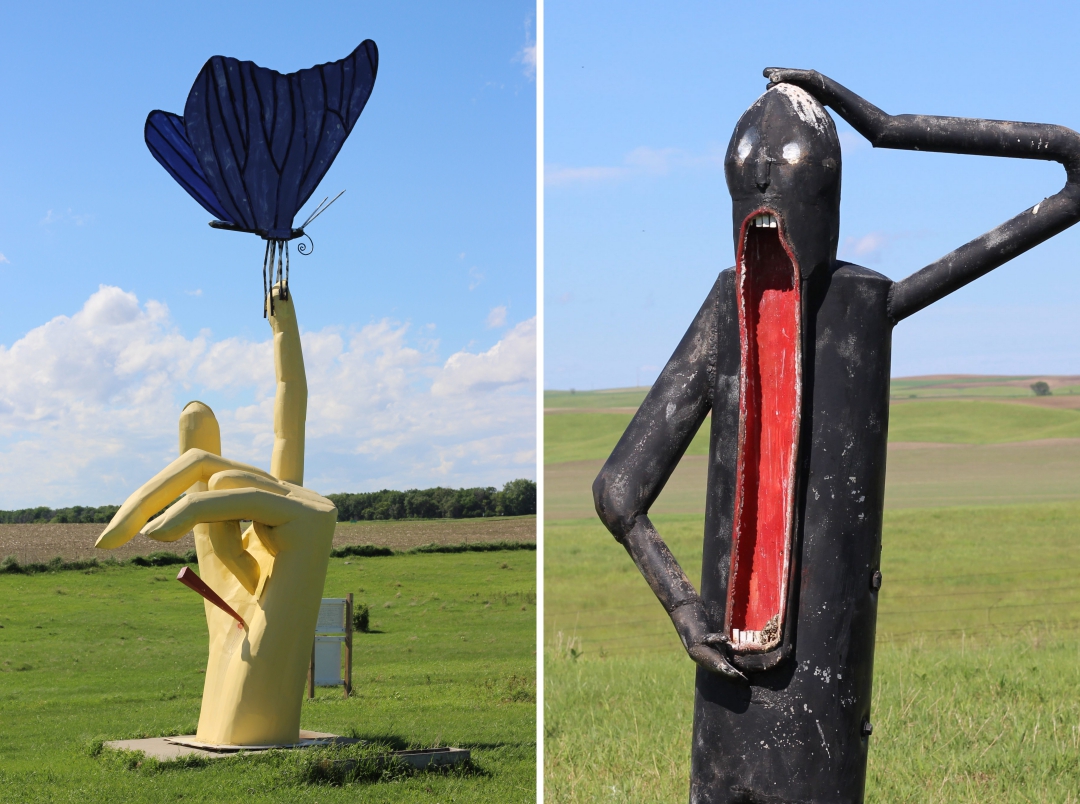 The sculptor Wayne Porter is often on site, collecting the fees, talking about the works, and introducing you to his dog. He showed us a picture of his next piece, a giant horse. It’s hard to imagine how he creates these massive pieces, much less moved them to the site.

To get into the park, you’ll go through a field of cattle. We got a kick out of these critters, which wouldn’t move out of our way. 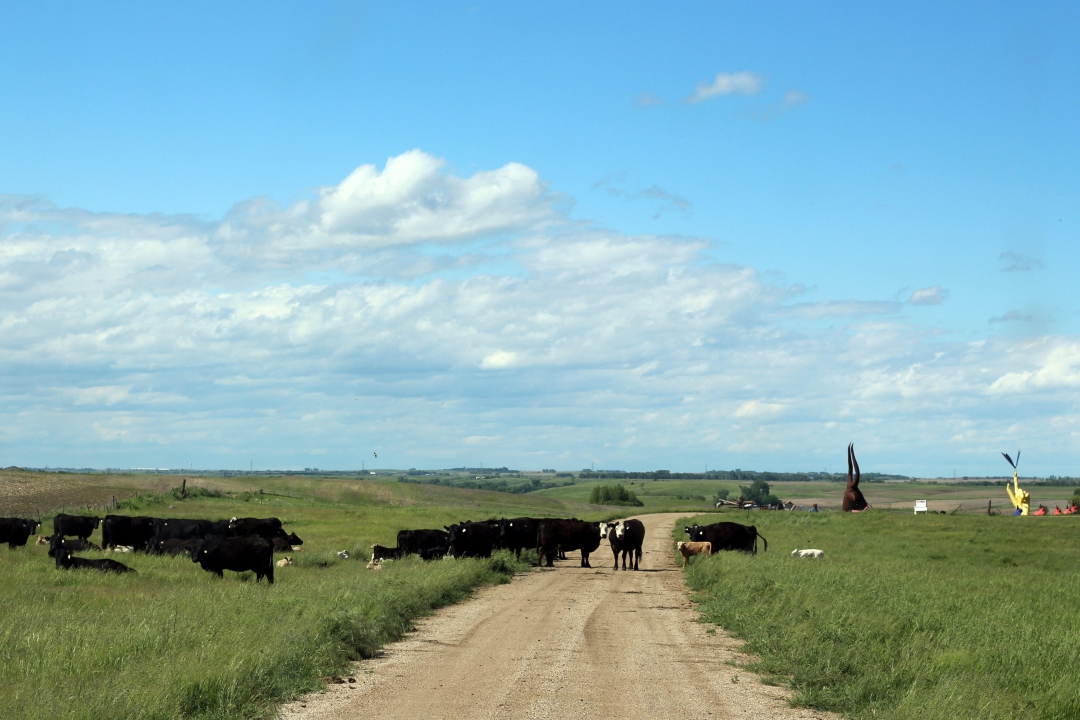 This little one wanted to be our friend. 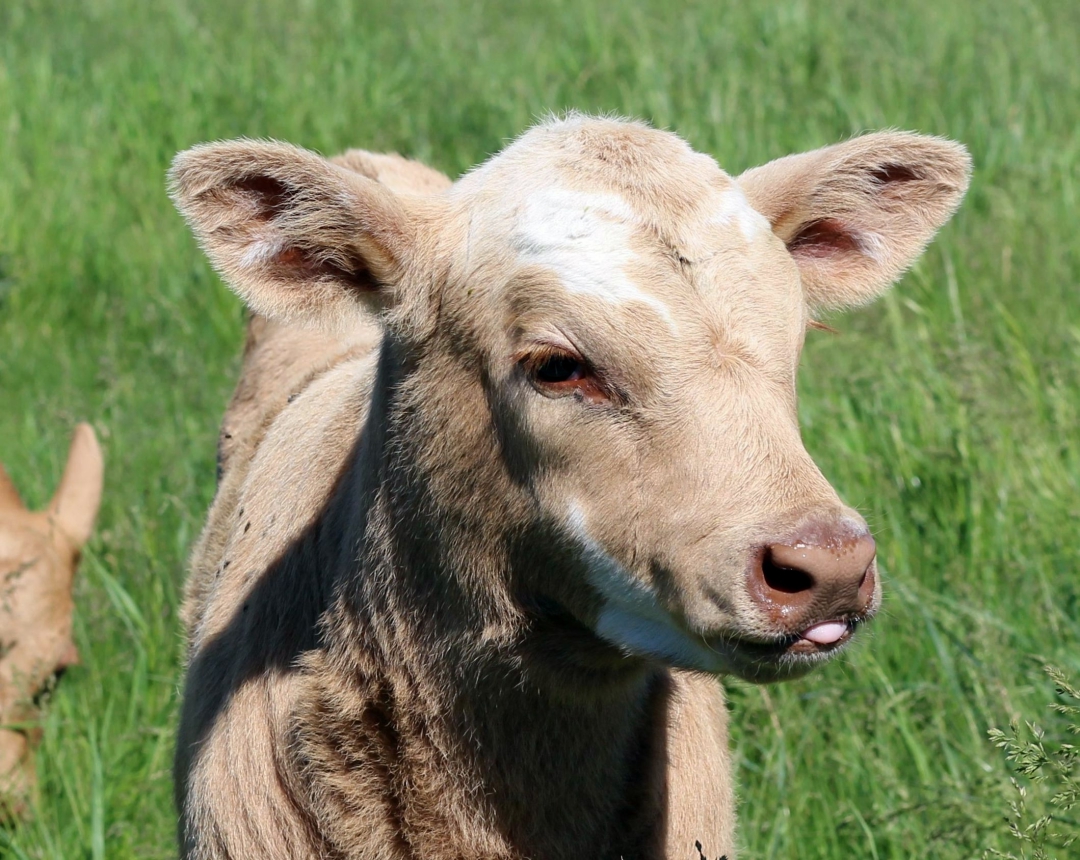 Porter creates huge sculptures by welding recycled materials. He also has written poems, which were a bit reminiscent of Shel Silverstein, to accompany some of the works. Be sure to stop and read these. 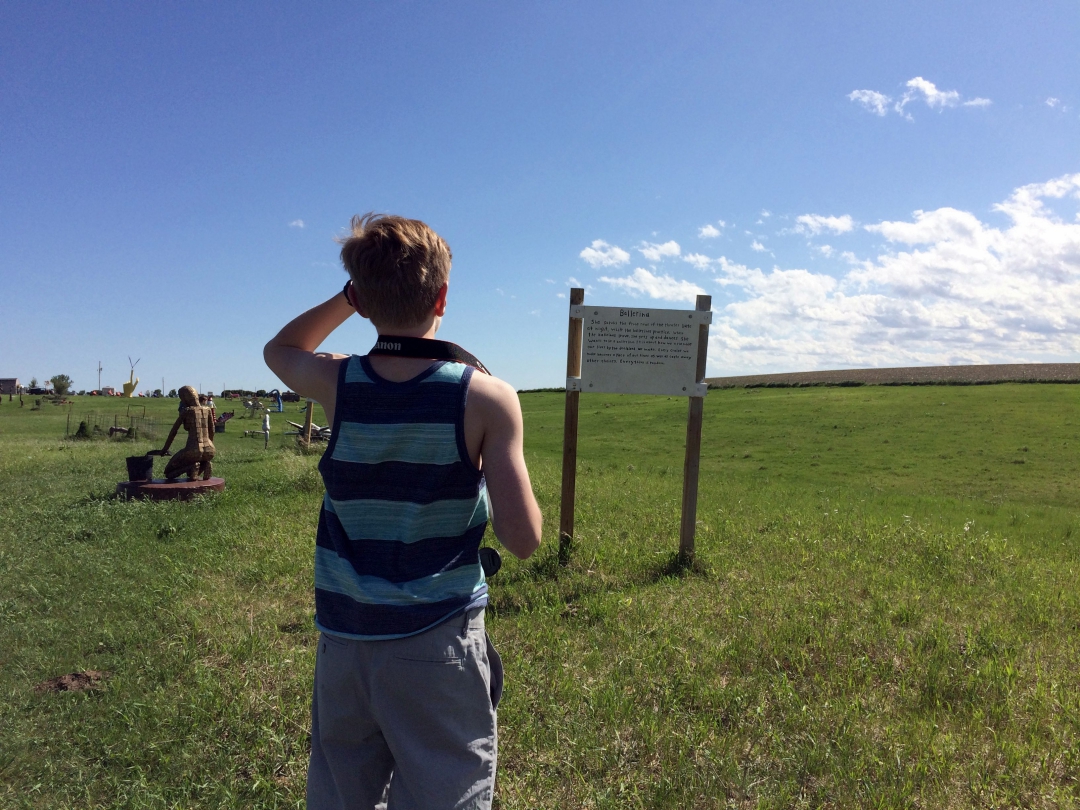 Some of the works were fun and fanciful. 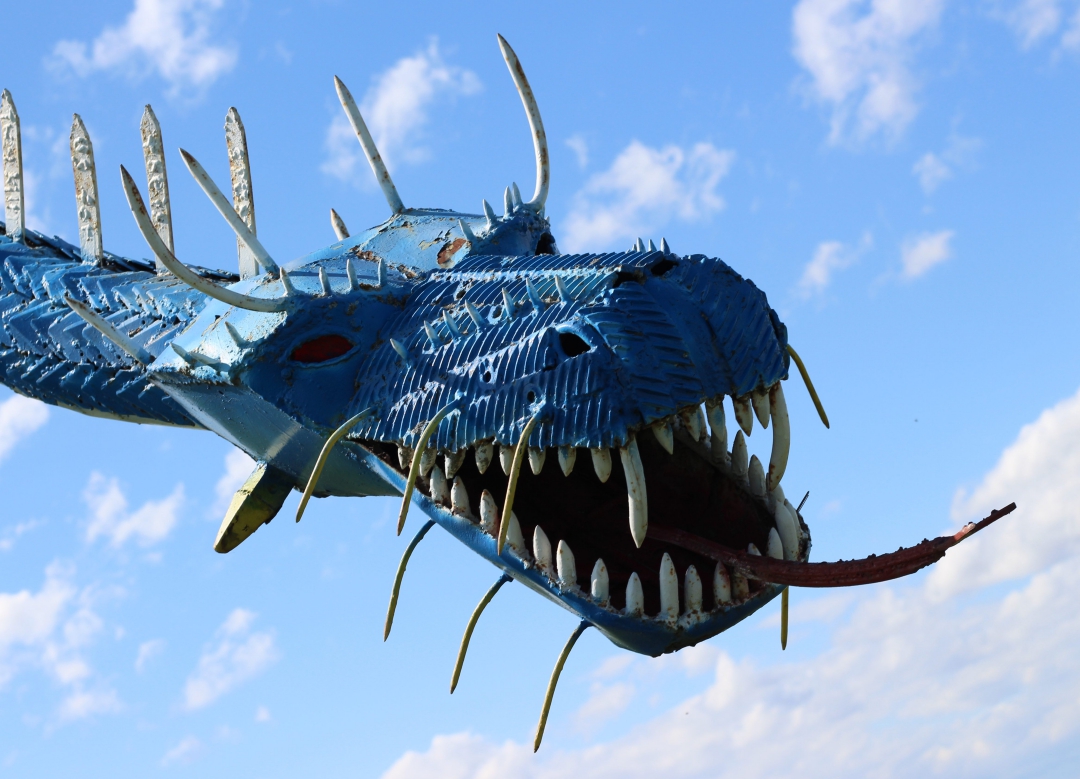 Other works were more somber and ominous. 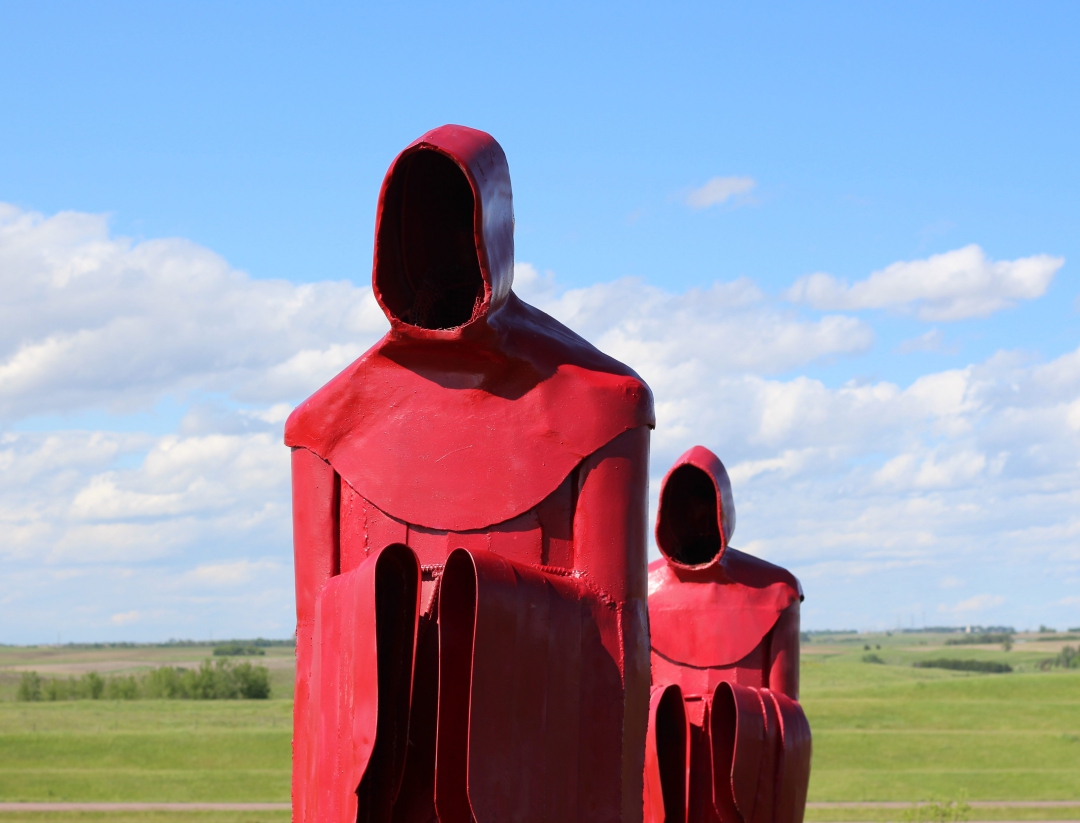 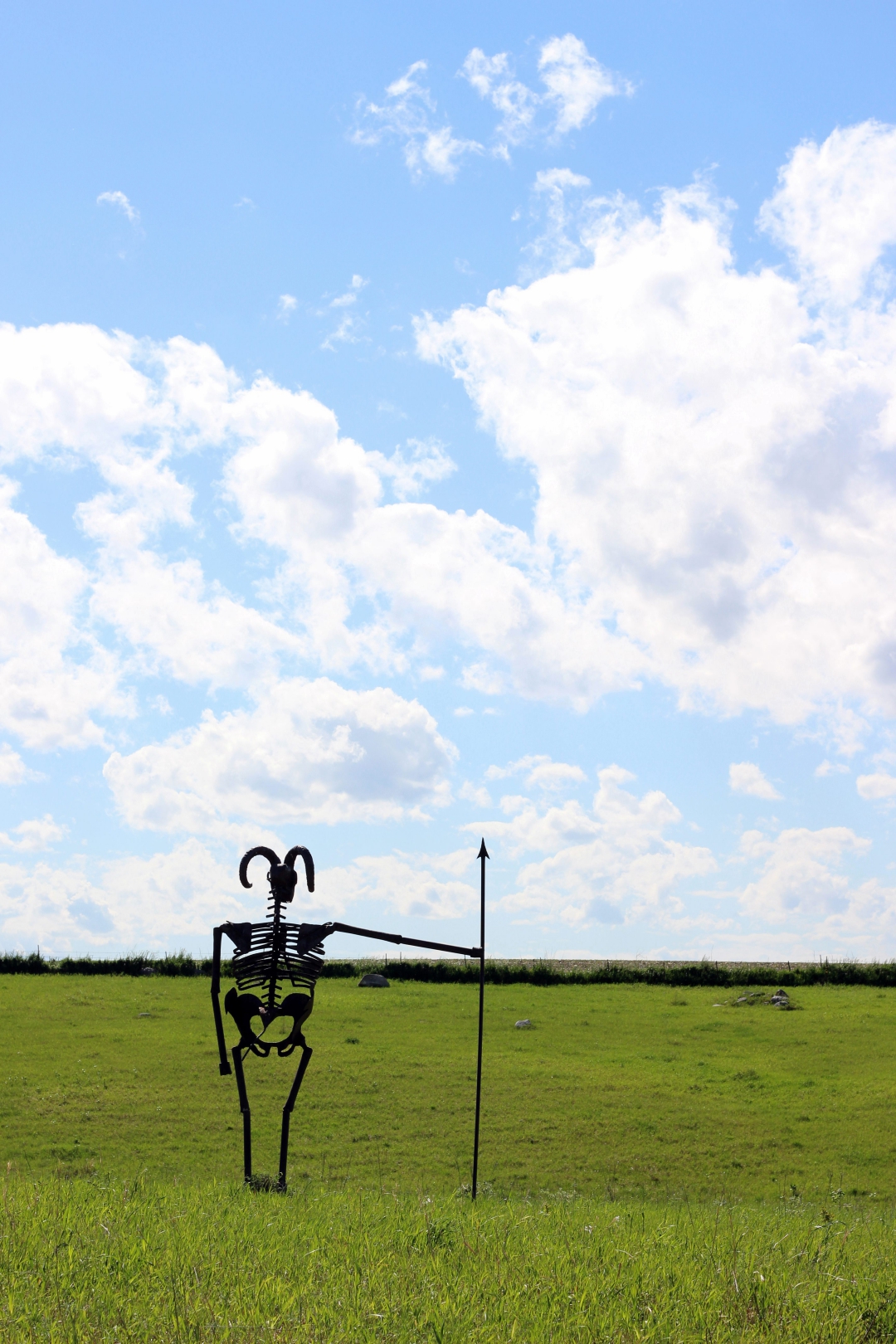 The massive bull’s head, which is visible from I-90, is the largest sculpture in the park. It stands over 60 feet tall and is made of welded railroad tie plates. There is something epic about this piece of work. Inside, you’ll find hidden surprise details, so take a peek. 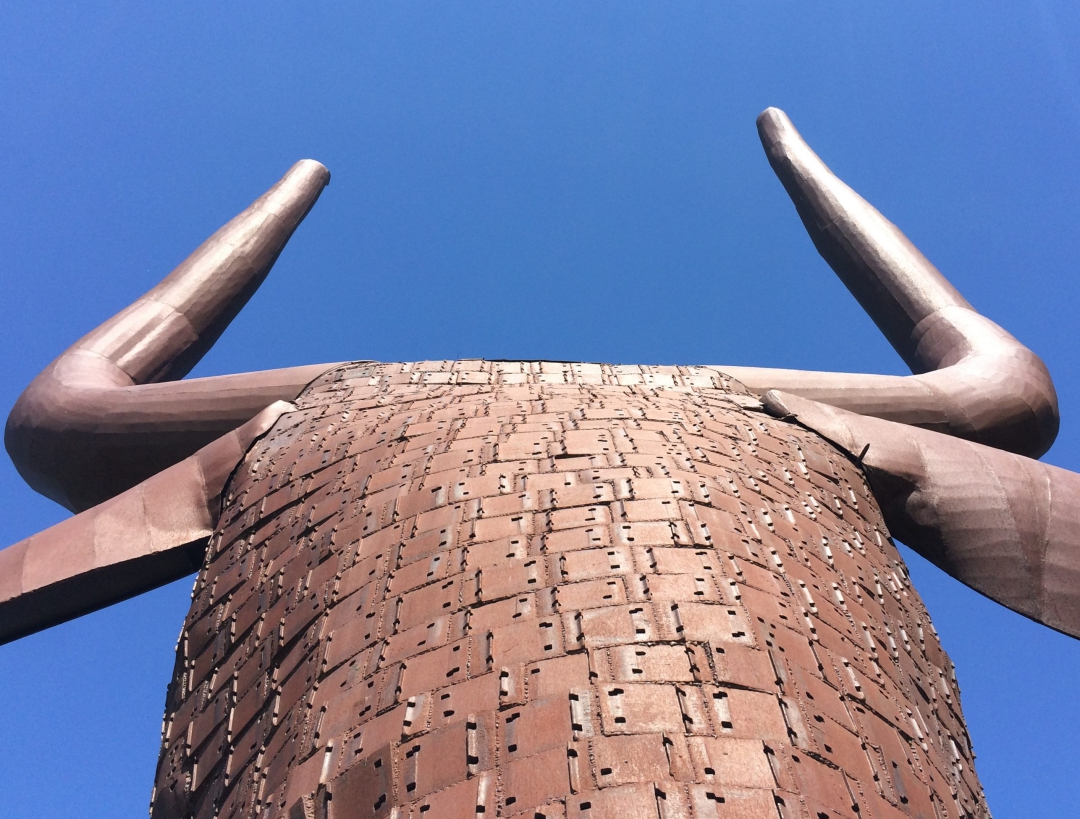 Our whole family thoroughly enjoyed this stop. It’s a great place to stretch your legs, play with your camera, ponder the artwork, and enjoy the view. 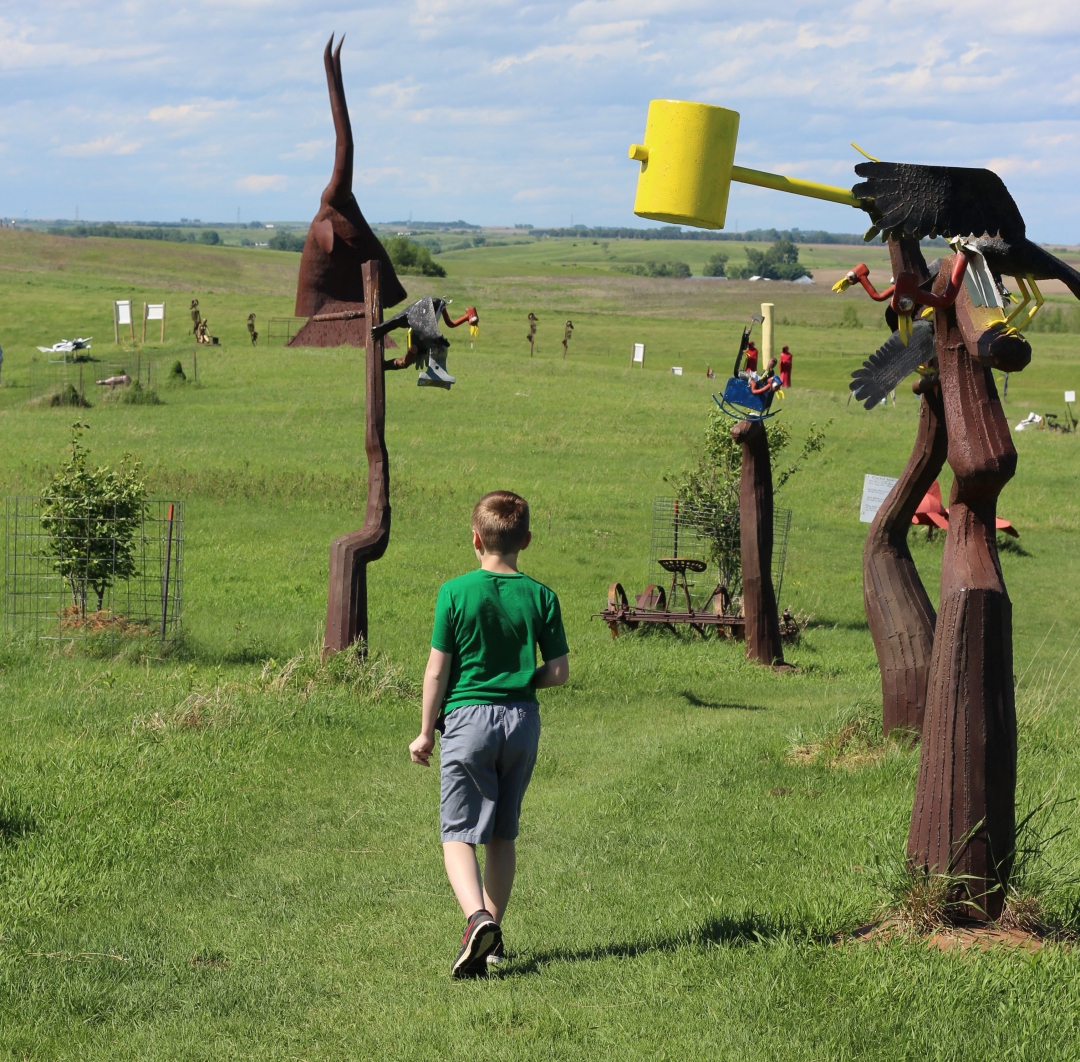 The Corn Palace in Mitchell, SD

As you continue west on I-90, you’ll arrive in Mitchell, SD, which is home of the famous Corn Palace. A roadside attraction for over 100 years, the Corn Palace is known for the murals on the building’s facade which are constructed of various types of corn. It’s sculpting or painting with corn, you might say.

We arrived in Mitchell a little late in the evening and decided to head down to check out the Corn Palace at night since we read about the new lighted domes. 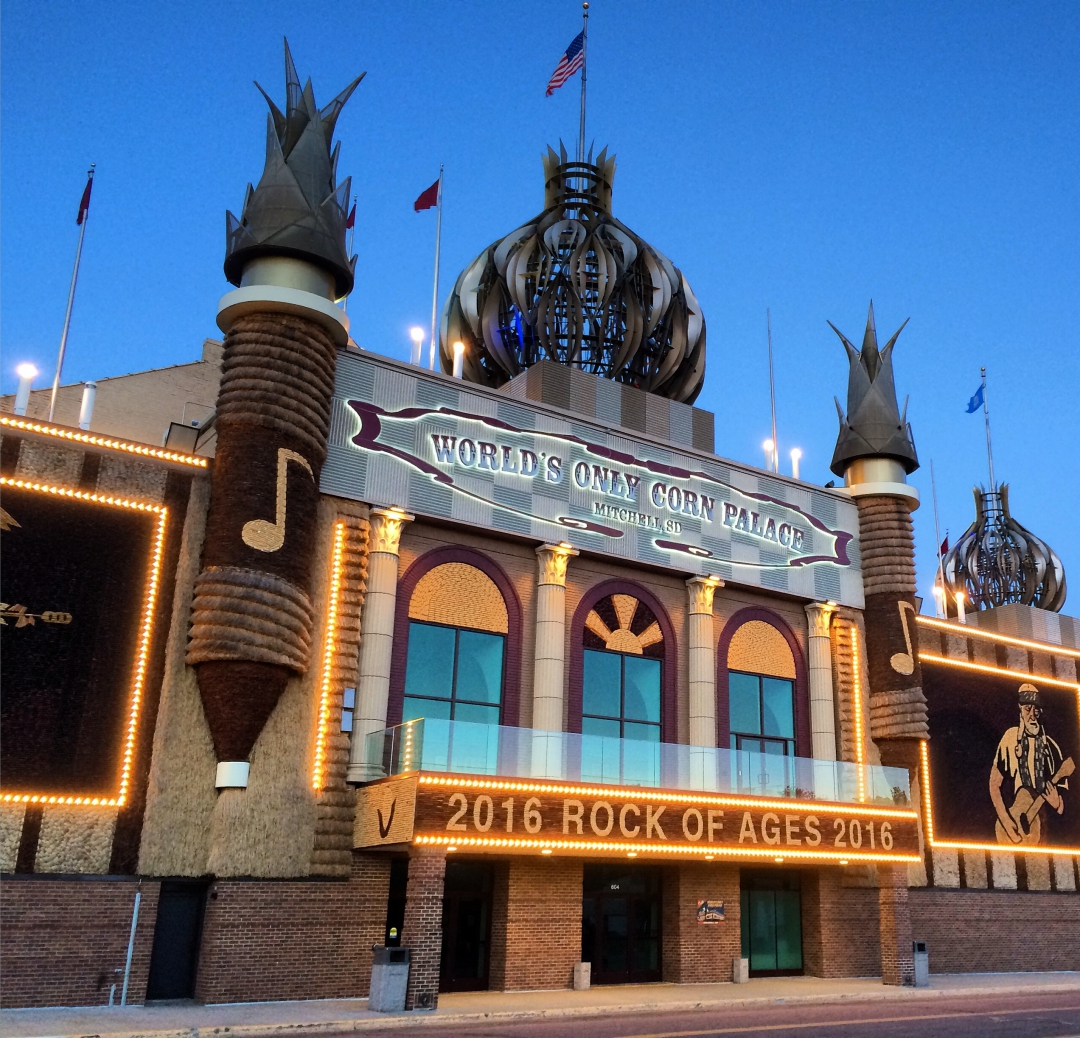 It was, indeed, a site to behold, as we looked up at intricate images of Elvis Presley and Willie Nelson constructed of corn. Each year, the murals are redone to a new theme, and this year’s theme is Rock of Ages. 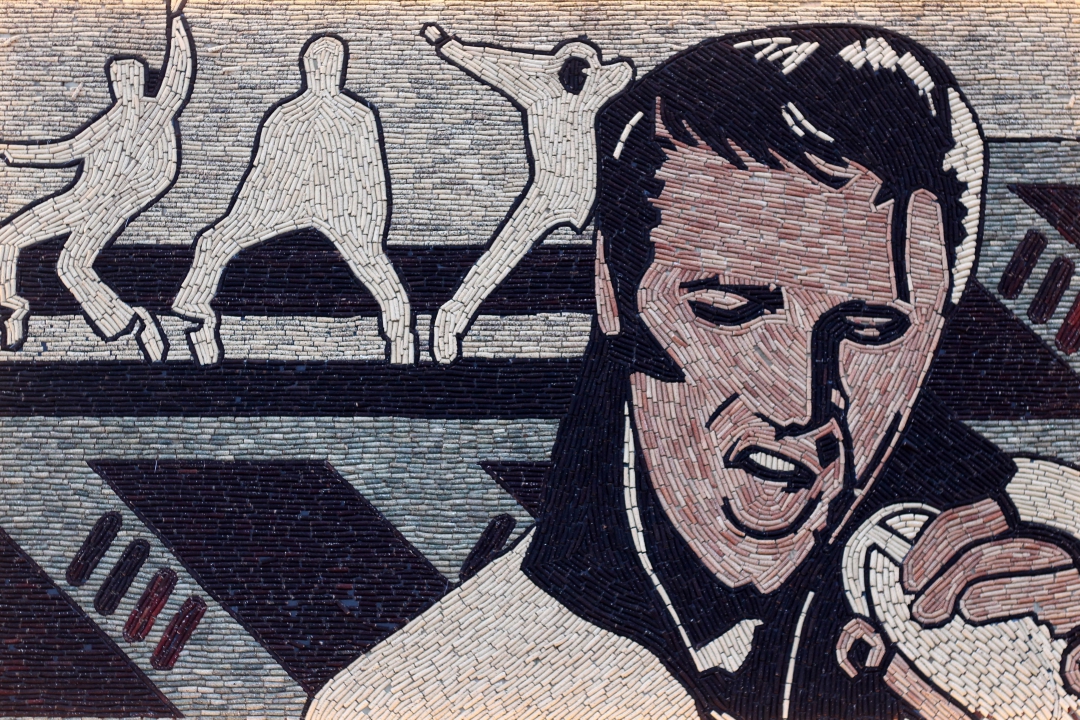 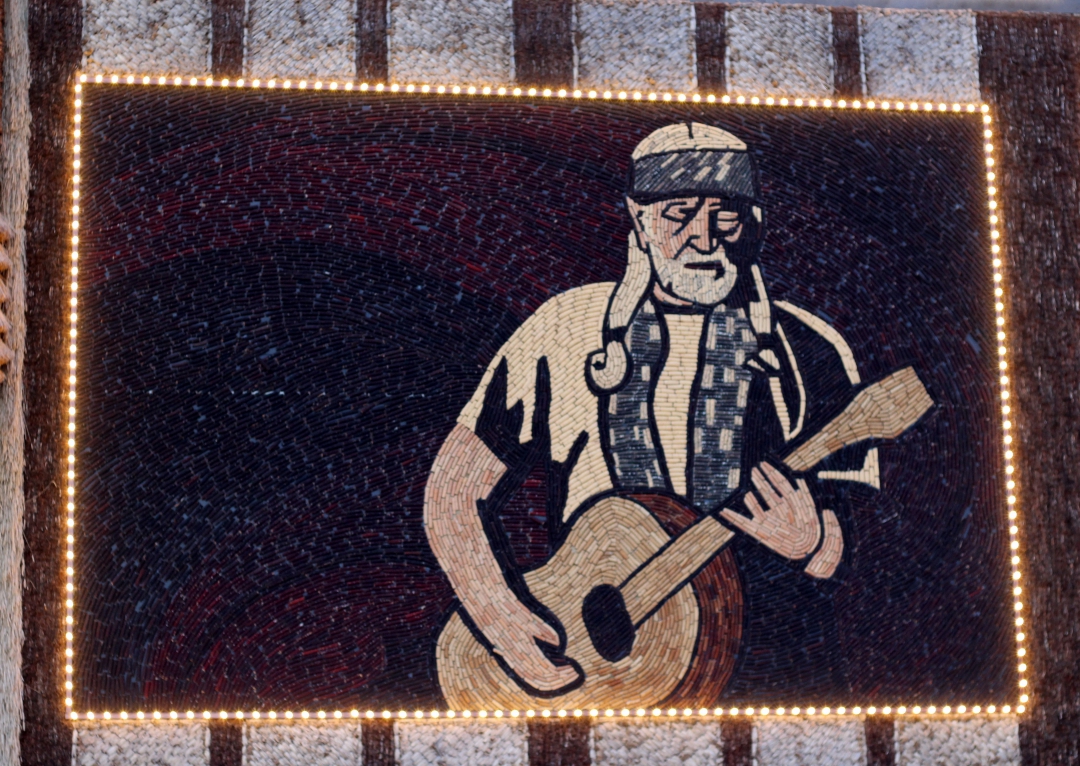 Since we arrived at the Corn Palace after hours, we didn’t get to do the tour or watch the film. We decided to hit the road the next day instead of returning, though I’m sure we would have enjoyed learning more about this unique roadside attraction if we had had time to stick around.

Birdy, You find the most engaging side trips ever. Those falls were beautiful and the sculpture garden was breathtaking! It was so much fun to follow along with you as you went west.

Thanks, Pamela! We like to make plenty of stops since it helps us appreciate the places we are going through and breaks up those long drives. So glad you enjoyed seeing our favorites! Thank you, thank you!