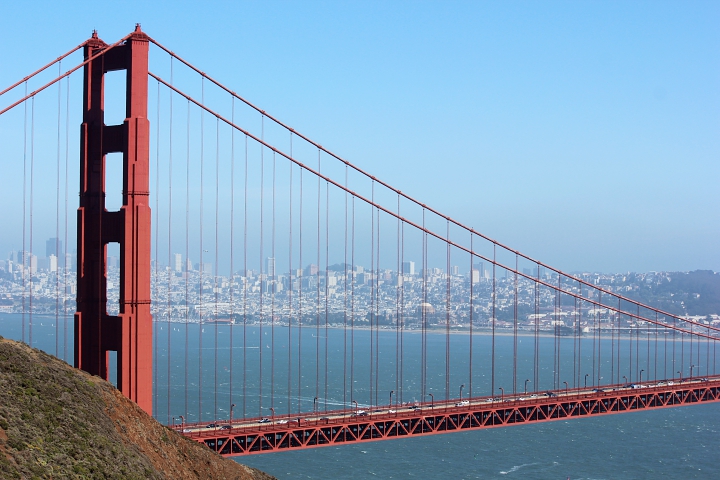 Wow, San Francisco. I hardly know where to begin this post. San Francisco was such an unexpected surprise, so full of vibrancy and beauty and people and fun. It was easy for us to fall in love with the City by the Bay.

San Francisco was a bit of an afterthought on our Birdy Goes West trip. Luckily, my husband pointed out that if we were only 4 hours away from the coast, it would be a shame not to go all the way.

So, go all the way we did. We twisted and turned our way out of the Sierra Nevadas and through the valley. We passed farms that seemed straight out of Of Mice and Men and stopped for fresh, Californian oranges at a roadside stand. Eventually, the highway rolled us across the bay, and then suddenly, the city was sprawled out around us. As we approached the city, we encountered the infamous fog and clouds.

I didn’t get a great picture, but Jack Kerouac must have seen a similar scene because he fully painted it with these words: “It seemed like a matter of minutes when we began rolling in the foothills before Oakland and suddenly reached a height and saw stretched out ahead of us the fabulous white city of San Francisco on her eleven mystic hills with the blue Pacific and its advancing wall of potato-patch fog beyond, and smoke and goldenness in the late afternoon of time.”

Having spent the last two weeks in the desert heat, it was a shock to step out of the car and be greeted by foggy drizzle and temperatures in the high 50s. We felt silly in our shorts and sandals and hopped into Birdy as soon as we could to bundle up in long pants and fuzzy jackets. Who knew you could wear a hoodie in San Francisco in June?

For the San Francisco leg of our trip, we decided to use San Francisco RV Resort in Pacifica as a home base. While the resort is mostly a parking lot for RVs, it was a parking lot right on the ocean. As soon as Birdy was properly situated, we rushed to the edge of the lot to get our first glimpse of the Pacific Ocean. This moment felt triumphant. We had done it…we had reached the very edge of America! 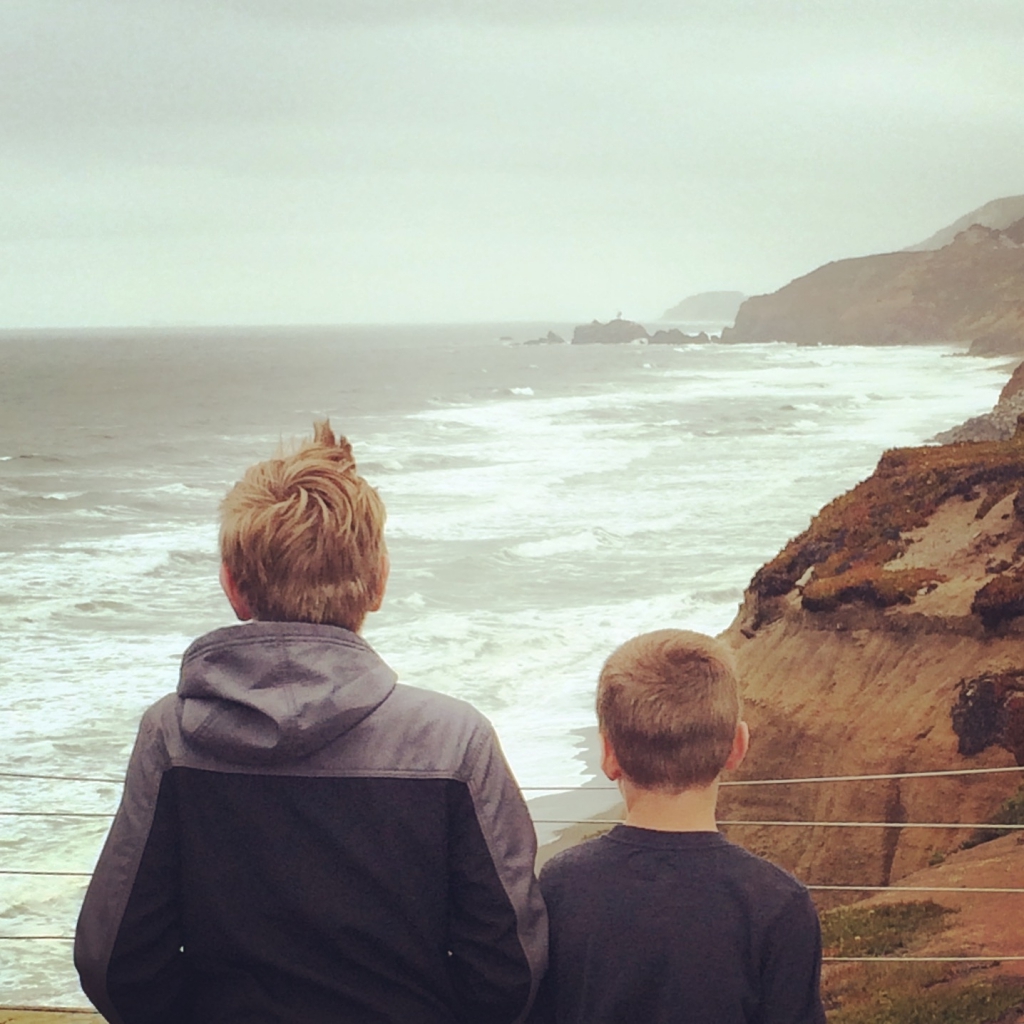 We got to enjoy views of the iconic Golden Gate Bridge many times as we made our way in, out and around San Francisco. I was unprepared for how giddy it would make me to see this beauty. This bridge is a magical focal point for a magical city with its contrast of the crisp, red architecture against the blue fluidity of the sky and the bay. 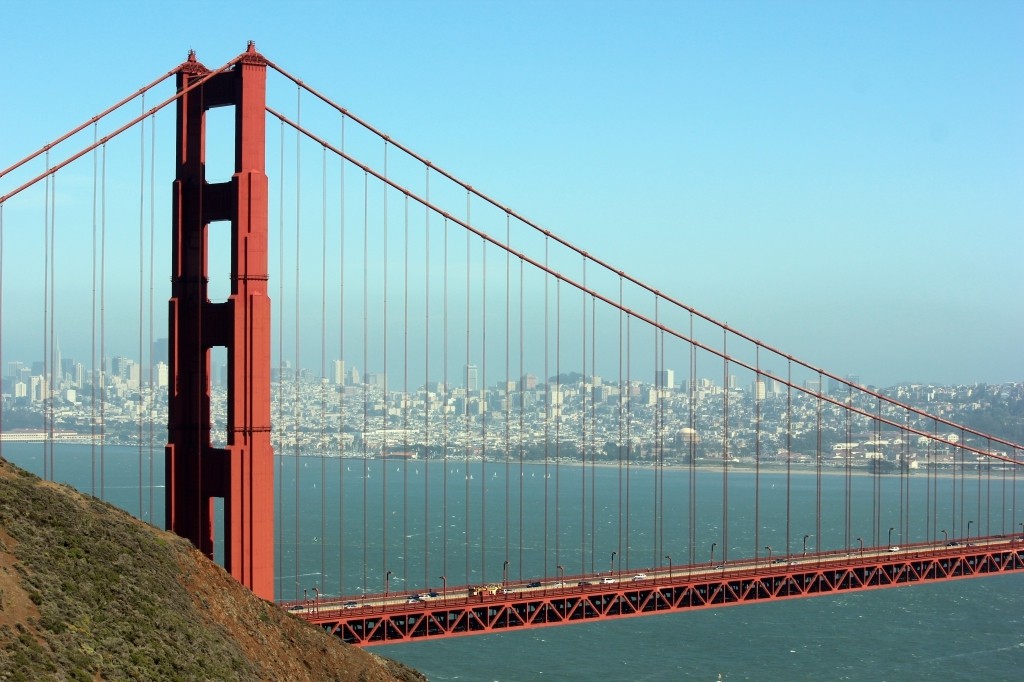 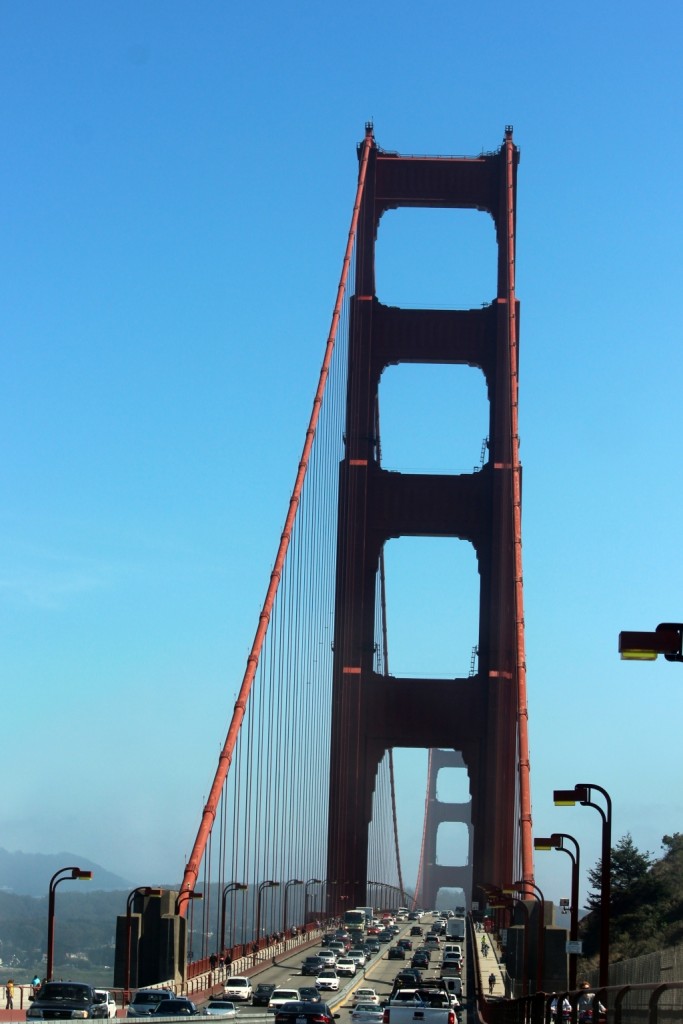 If you cross the bridge, expect a toll bill in the mail when you return home. If you don’t pay it on time, expect a $25 late fee. Trust me. We ended up owing $32 for crossing the bridge, but it was totally worth it (unlike the $22 we spent on annoying tolls in Oklahoma).

We had a gorgeous day to explore the city, with sunshine and blue skies. We decided to head to the Fisherman’s Wharf area. We had worried that this tourist area would be too touristy, but it ended up being a fun place to get our first taste of the city. Fisherman’s Wharf is full of shops, restaurants, and interesting people. 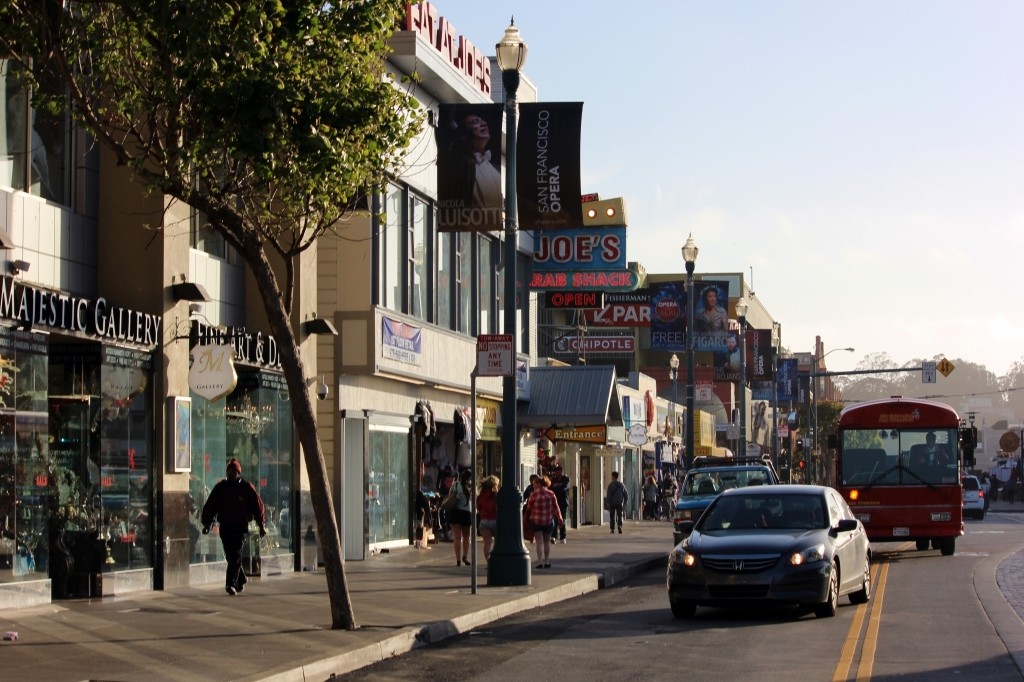 A band was playing out by the bay as people, young and old, danced along. Street performers were doing magic tricks and making balloon animals for passersby. We even saw a skateboarding dog. 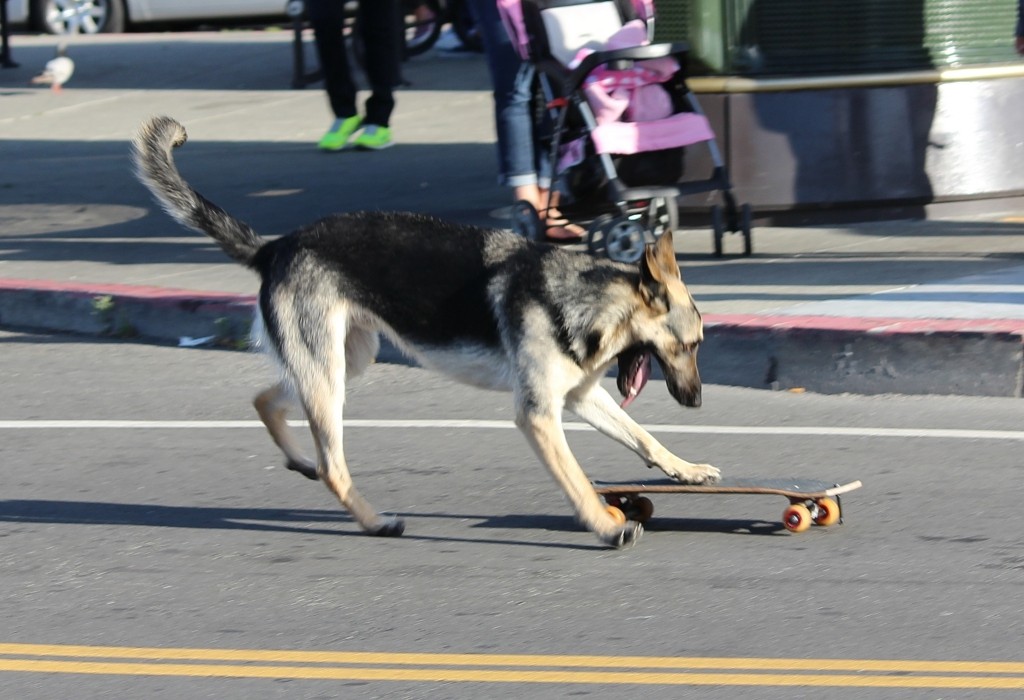 We didn’t take the time to ride a trolley or a street car, but we thought it was fun to see them pass by. Not only is the bridge iconic in this great city, their public transportation is as well. 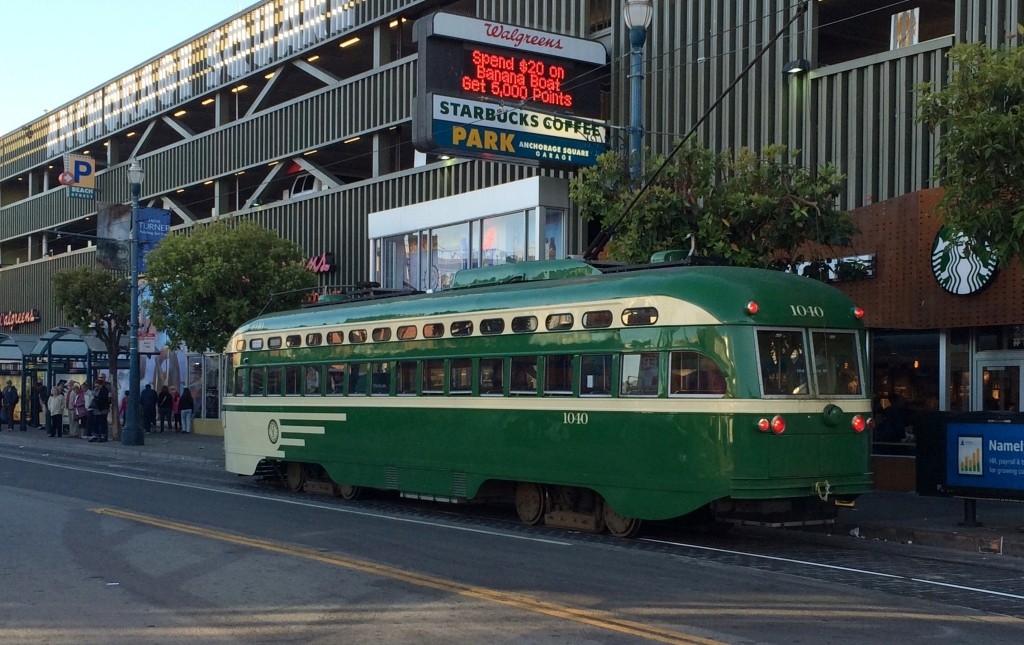 Our first stop was the Musee Mecanique. A friend had told us that our boys would love this place, and she was spot on. It’s a video game arcade with antique penny games from the 1900s. Admission is free, just pay for the games you play (due to inflation, the games are 25-cents and up). 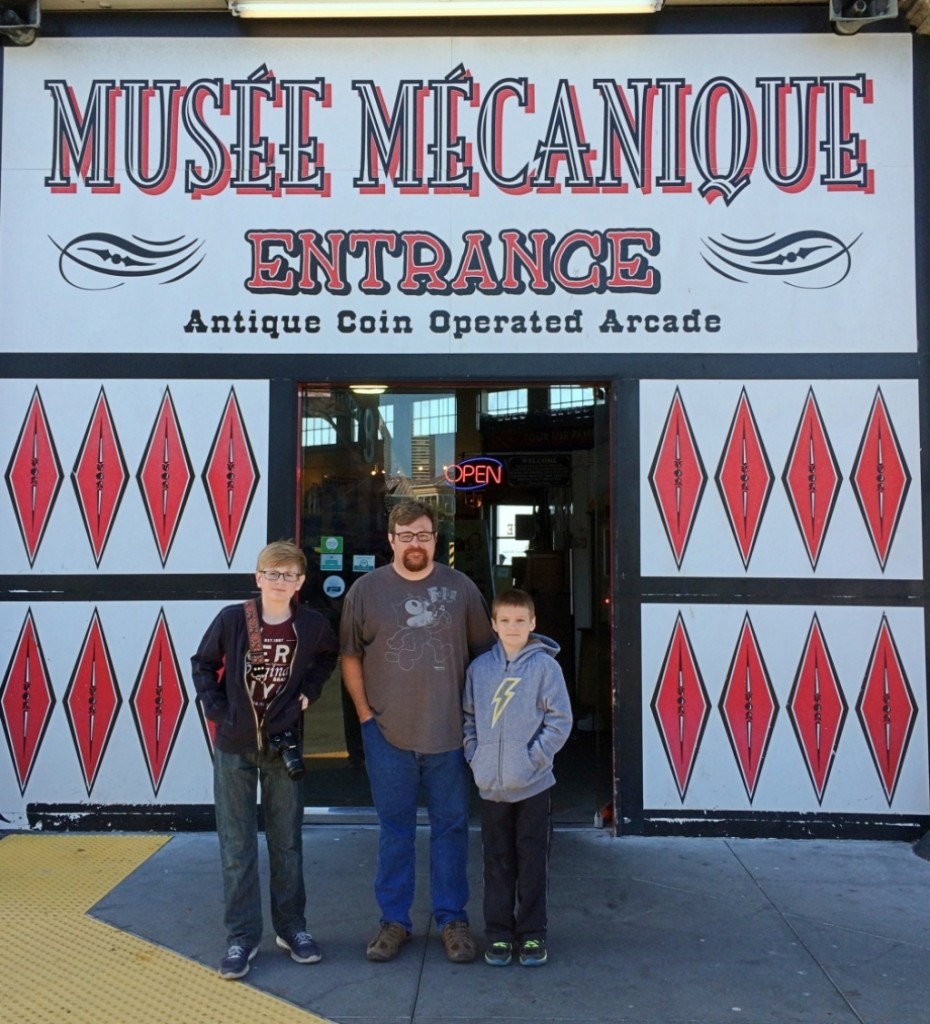 What an interesting collection of games they had! We got to see all sorts of vintage games, find out our fortunes from a weird cast of characters, and even had to explain a certain adjective to my younger son–yikes! (see last photo below) 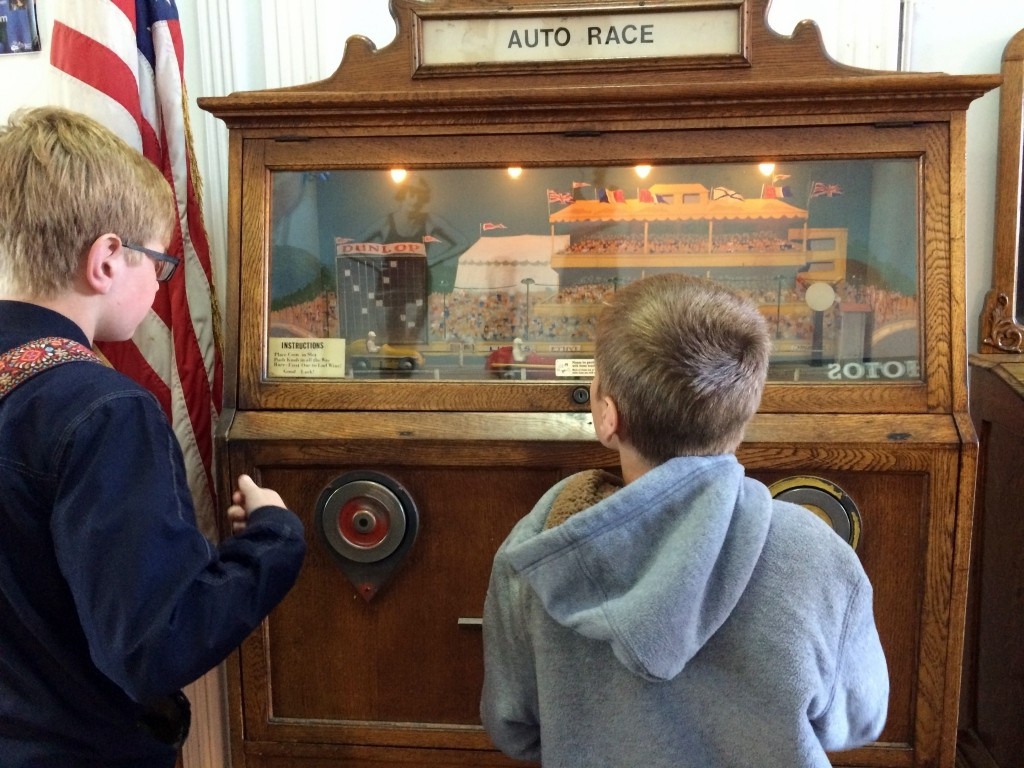 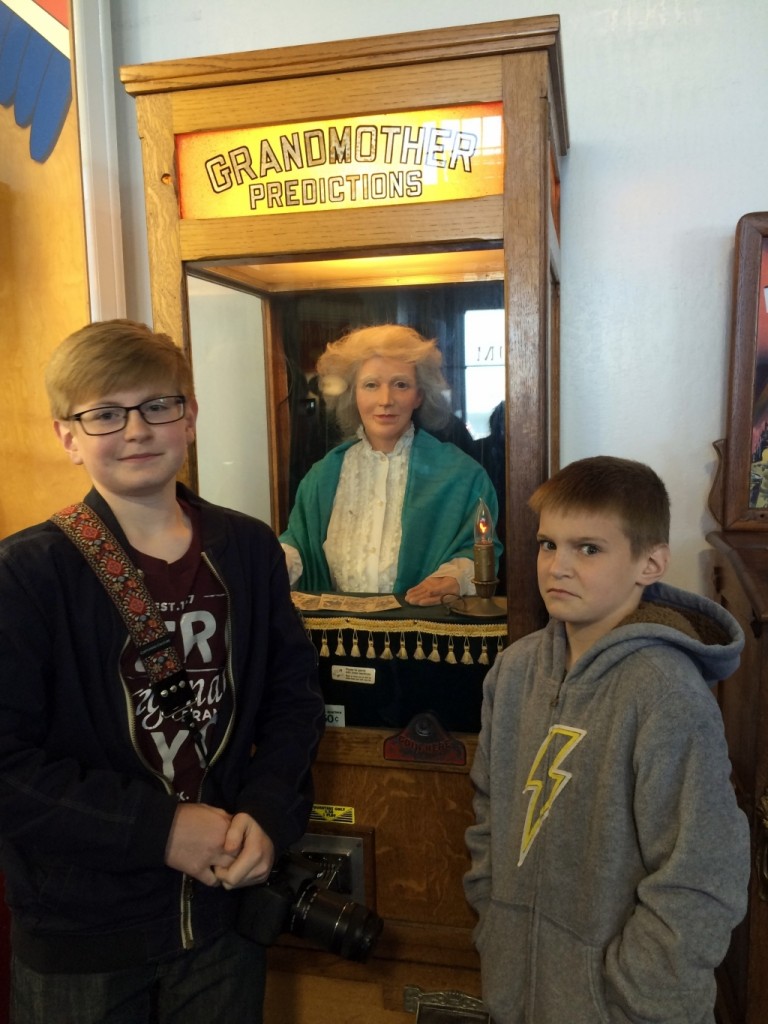 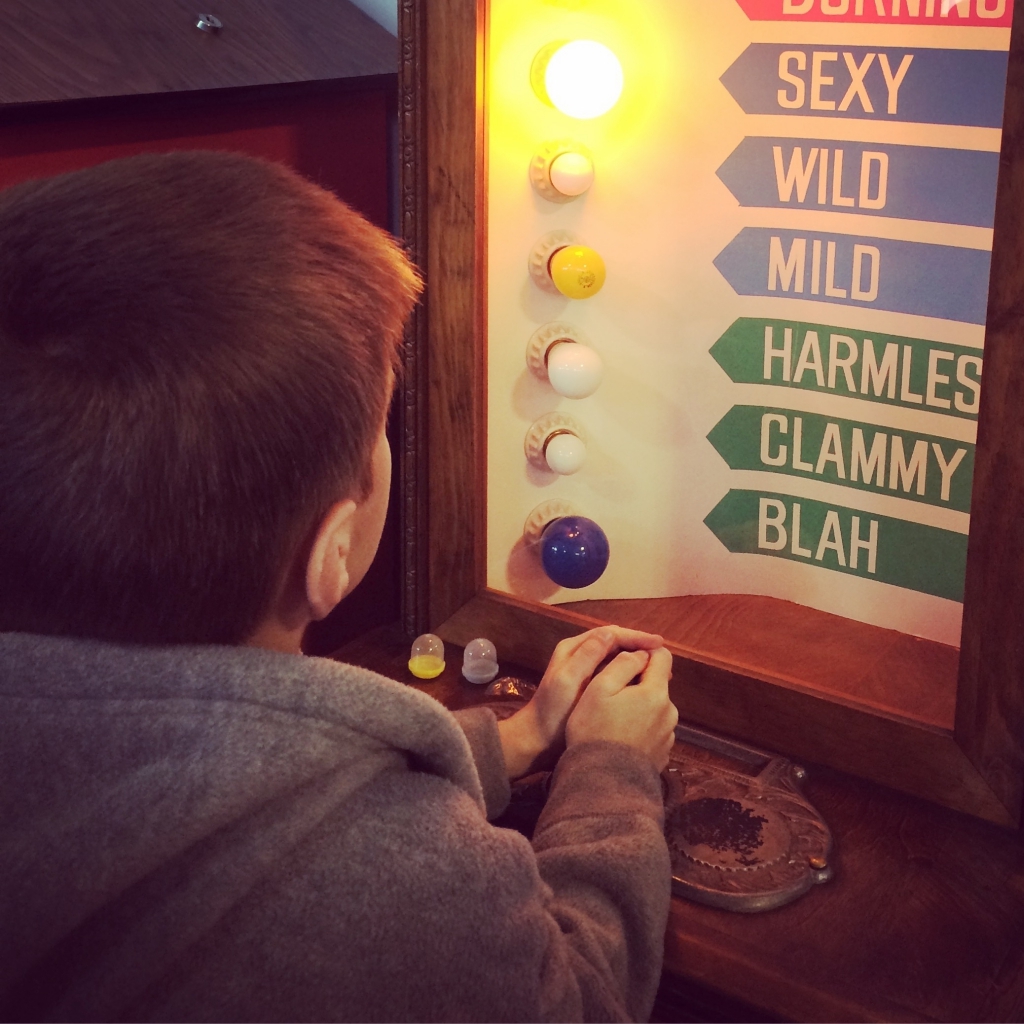 After we left Musee Mecanique, we took a stroll along the bay. As much as the boys enjoyed the games, they enjoyed the wildlife outside even more. This seagull was clearly posing for the camera. 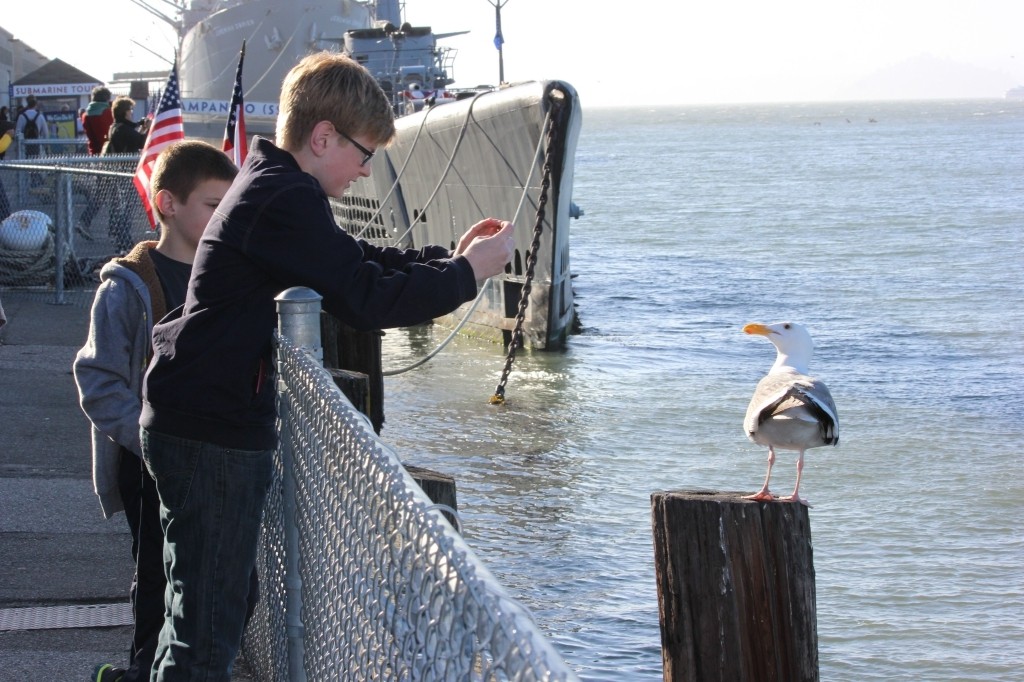 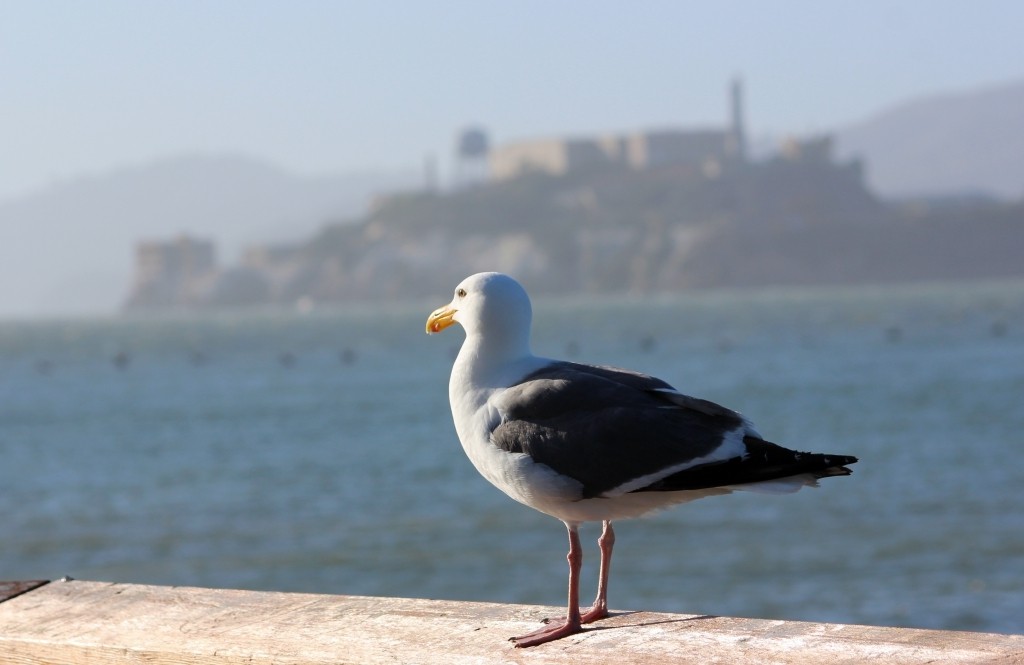 We had originally planned to spend part of a day touring Alcatraz. Even though many people had warned us that tickets have to be reserved in advance, I forgot that detail in my rush to close out our school year and prepare for our trip. Alcatraz tours include a ferry ride out to the island, which would have been fun, and we would have gotten another cancellation for our National Parks passport book. While I was disappointed we didn’t get to go on a tour, it left us more time for seeing other parts of the city.

No trip to Fisherman’s Wharf is complete without a walk to Pier 39. This area is famous for the sea lions who have claimed a spot for their own. Even if you don’t appreciate the sea lions, this pier is a great place to take a stroll and get another perspective of the bay. 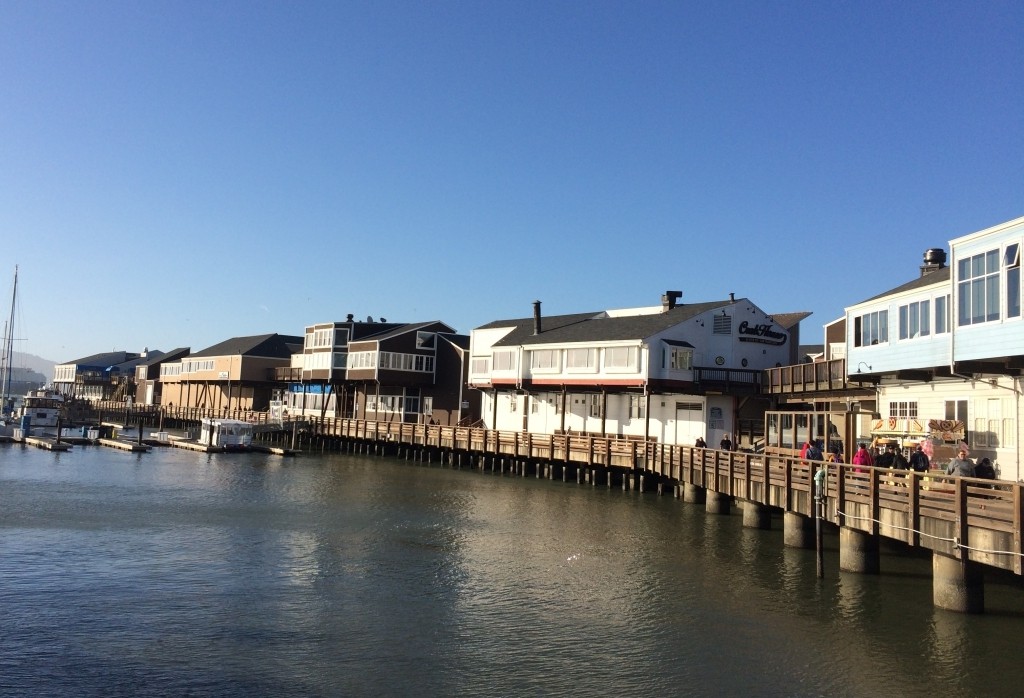 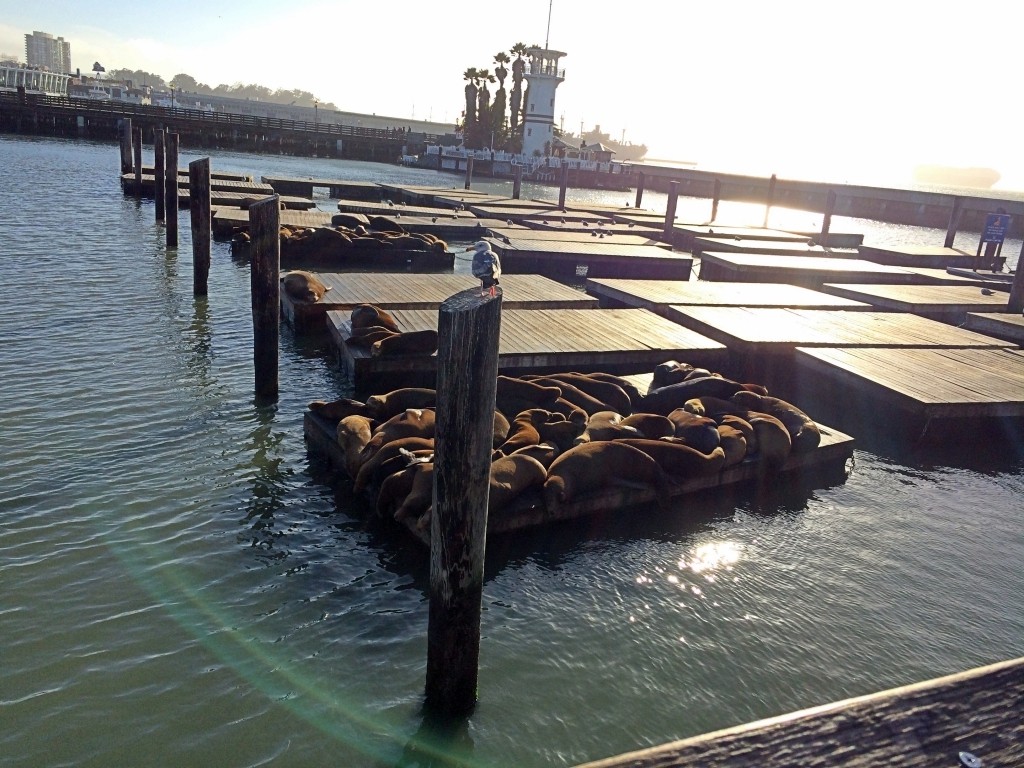 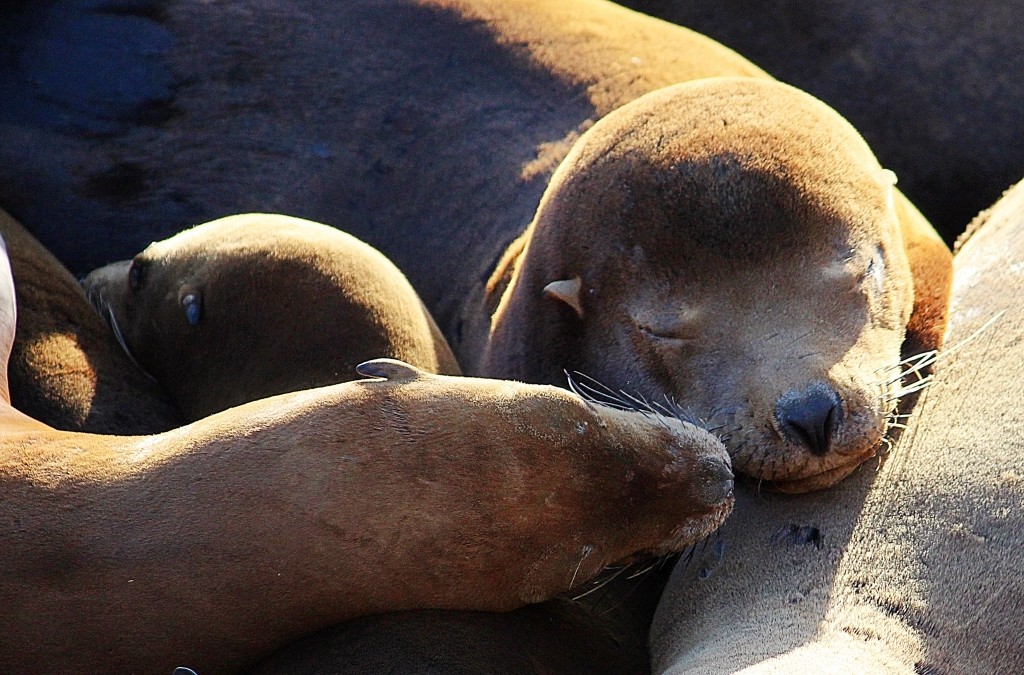 Our kids had a great time at Fisherman’s Wharf. My younger son even purchased a cool t-shirt souvenir. Perfect! 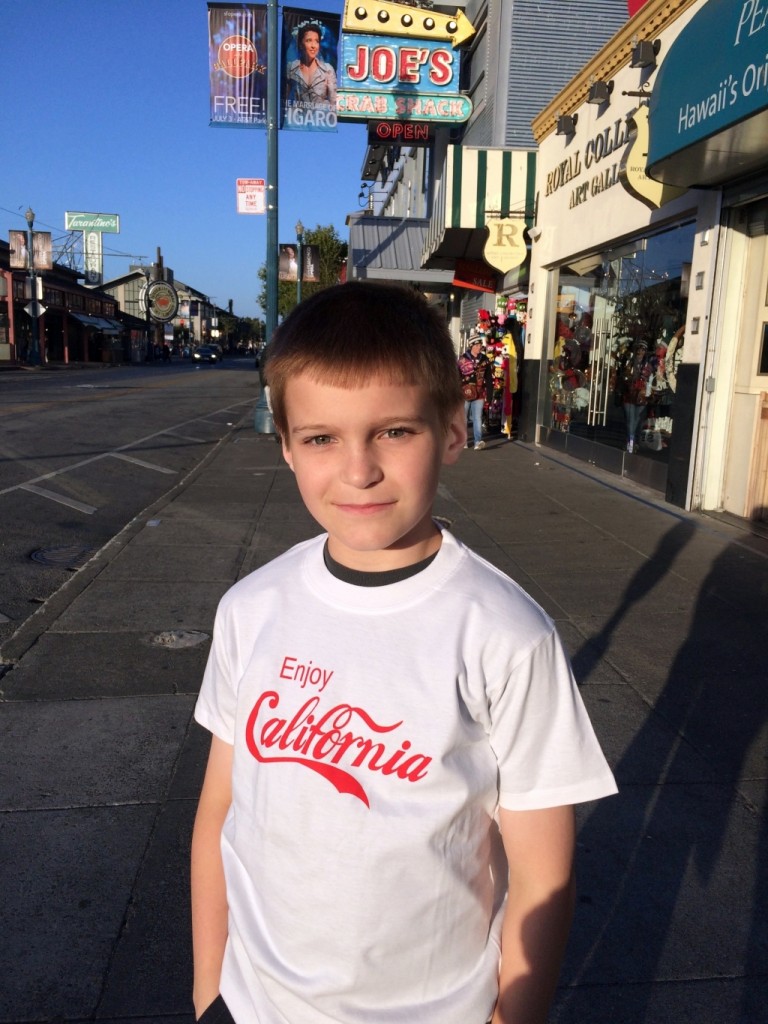 While in high school and college, my husband was a fan of Jack Kerouac and the beatnik writers. One such writer, Lawrence Ferlinghetti, opened City Lights Books in the 1950s. Since then, City Lights has sold and published books, hosted poetry readings, and served as a gathering place. Though it’s over sixty years old, this place still oozes coolness. 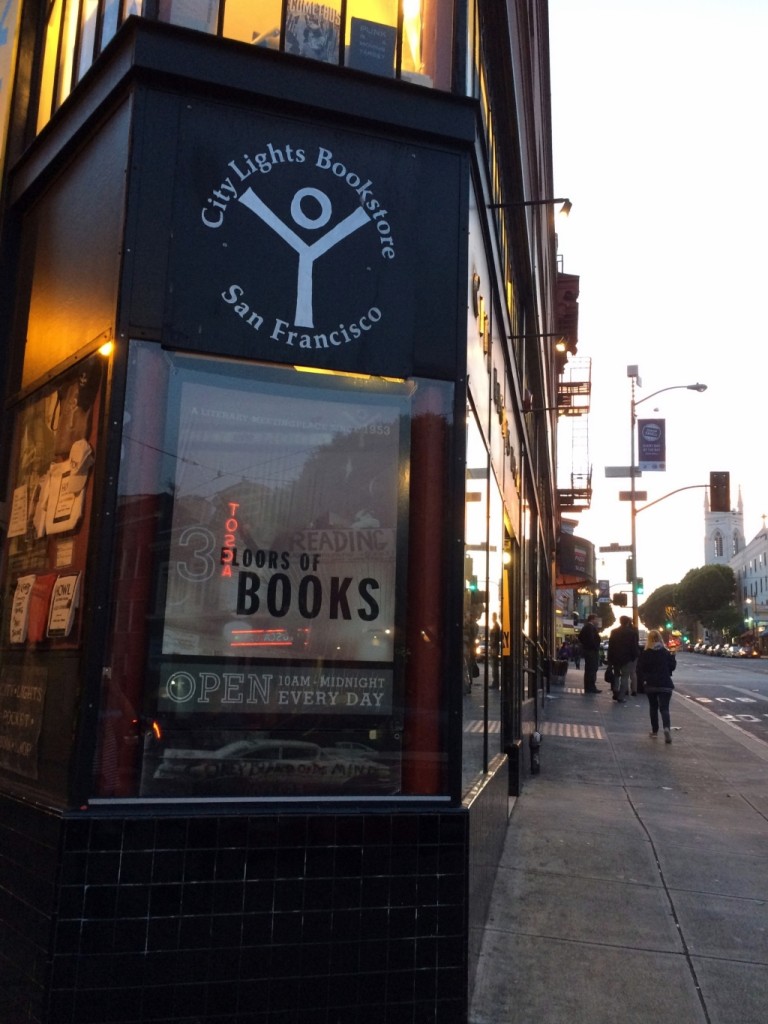 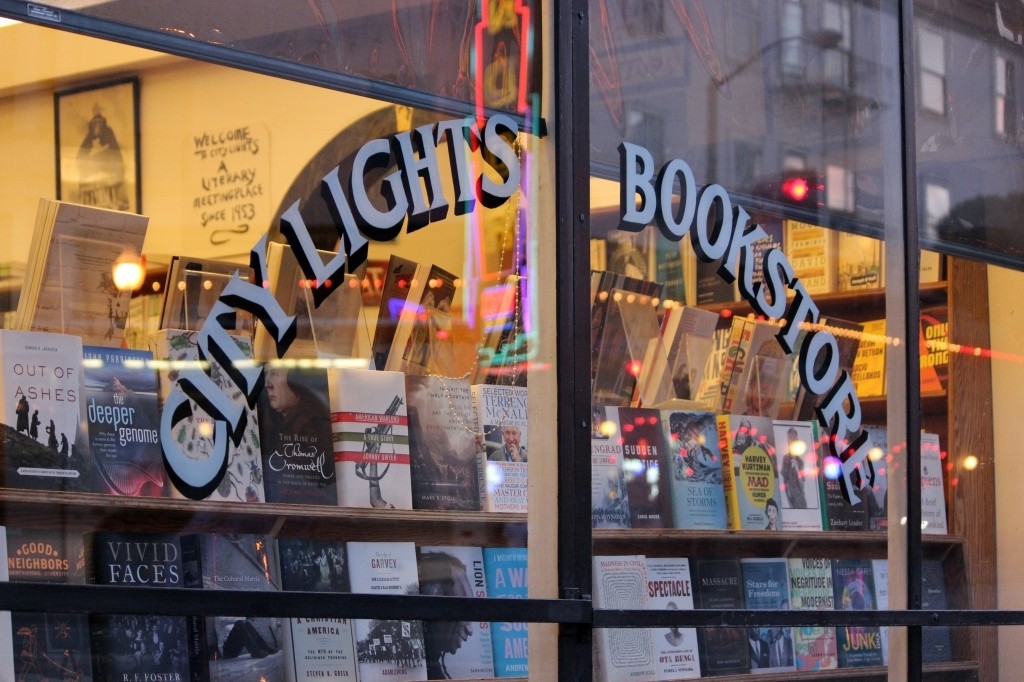 We had thought about Kerouac many times on our trip because he had travelled Route 66 many times and wrote about his crazy adventures along the way. He wrote, “There was nowhere to go but everywhere, so just keep on rolling under the stars.” At City Lights, the beatnik spirit clearly lives on. We especially enjoyed the photographs and handmade signs that adorn the walls: 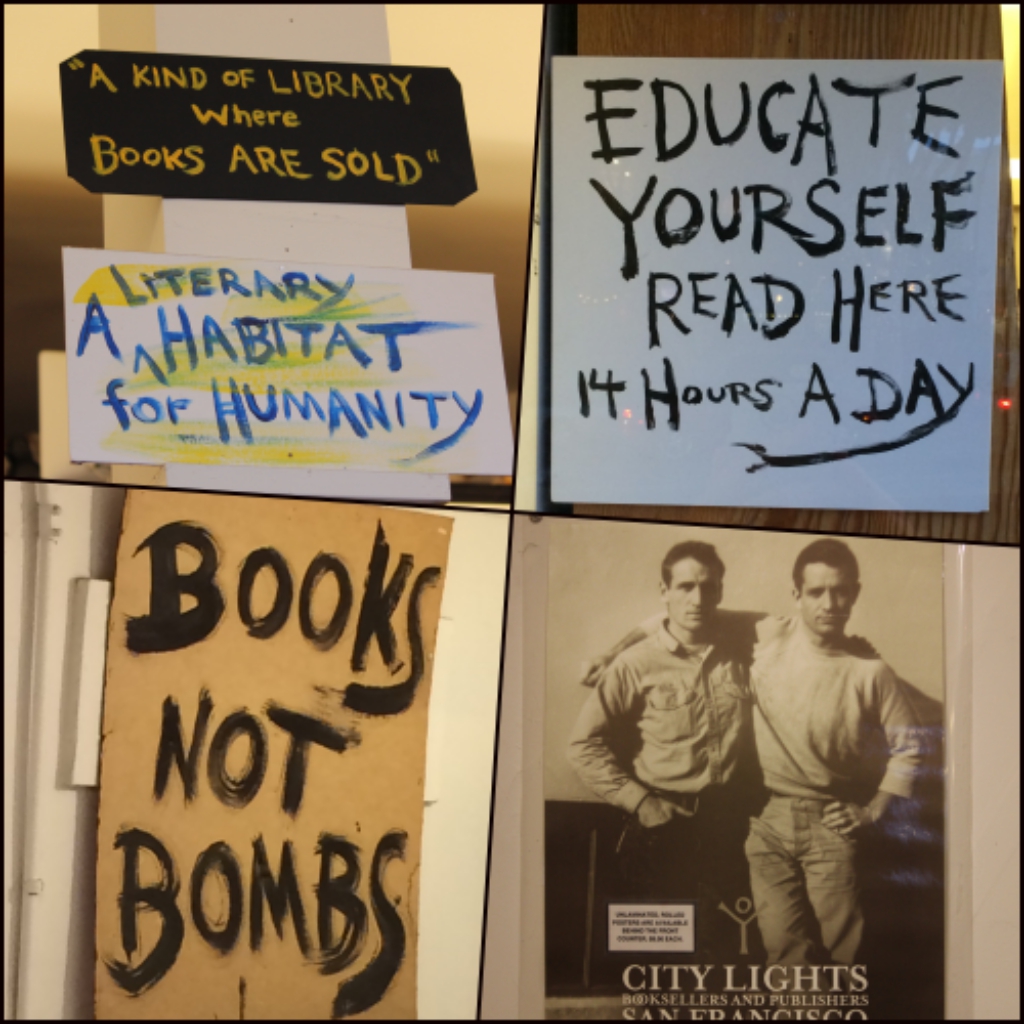 Though City Lights was a destination in and of itself, we also enjoyed checking out the downtown area of San Francisco. We were treated to an especially beautiful night as the blue sky turned violet and pink when the sun sank away. 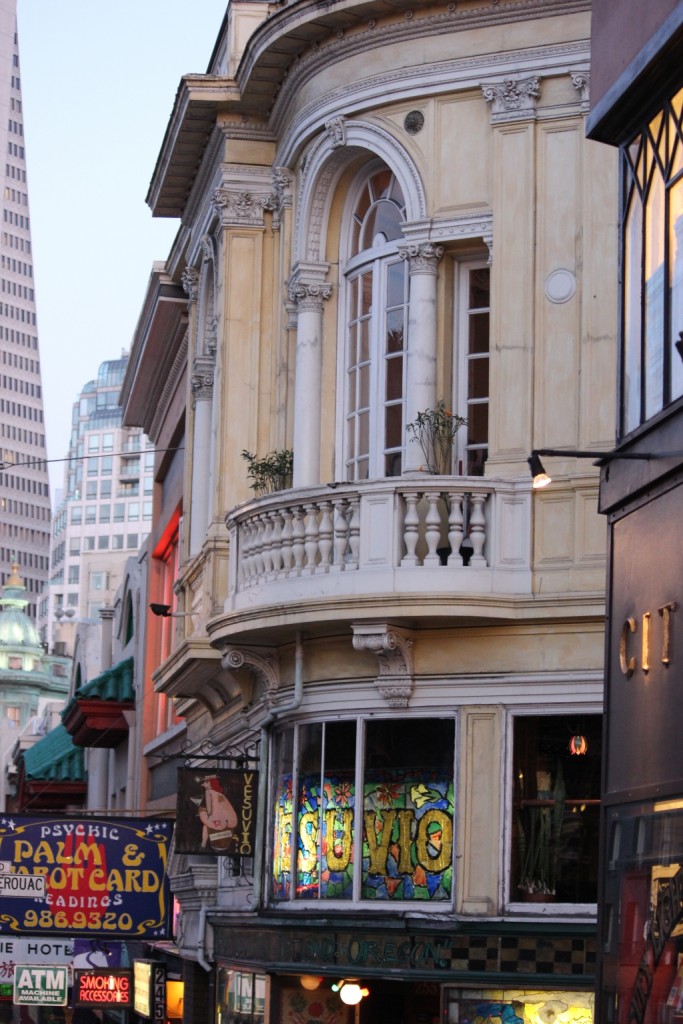 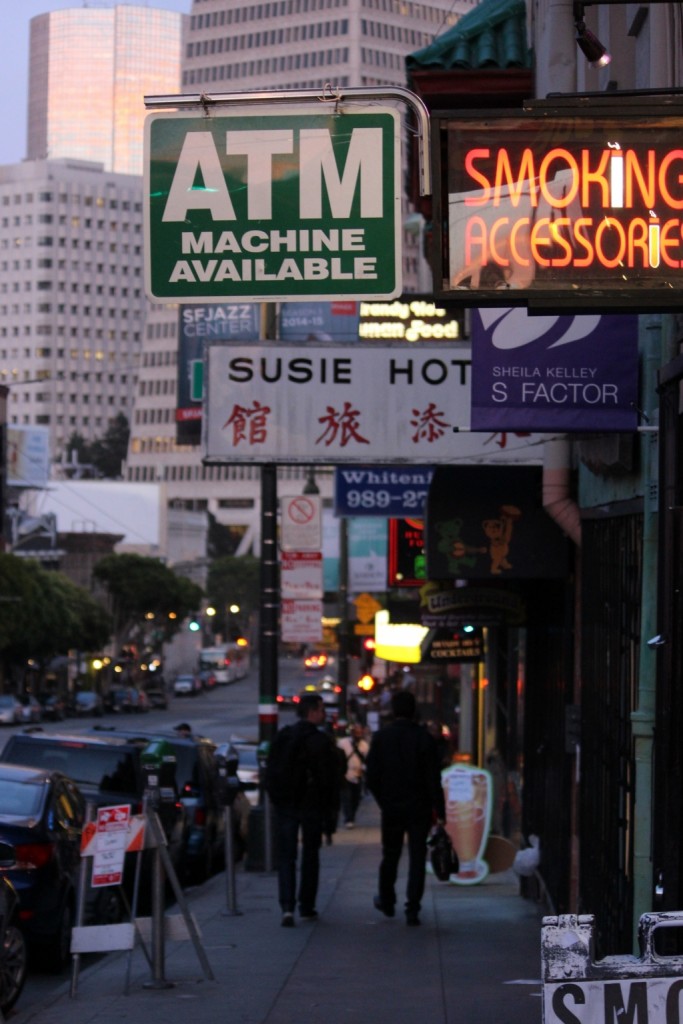 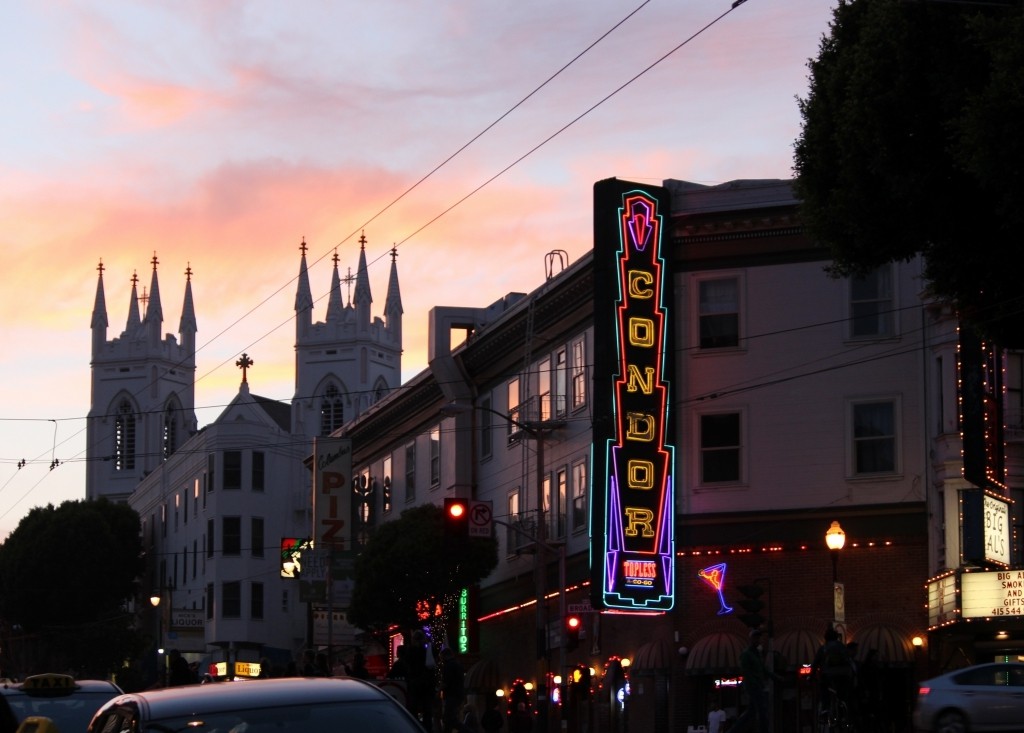 Downtown San Francisco is rich in history, and yet fully modern. It’s a place where old meets new and exists beautifully side by side. 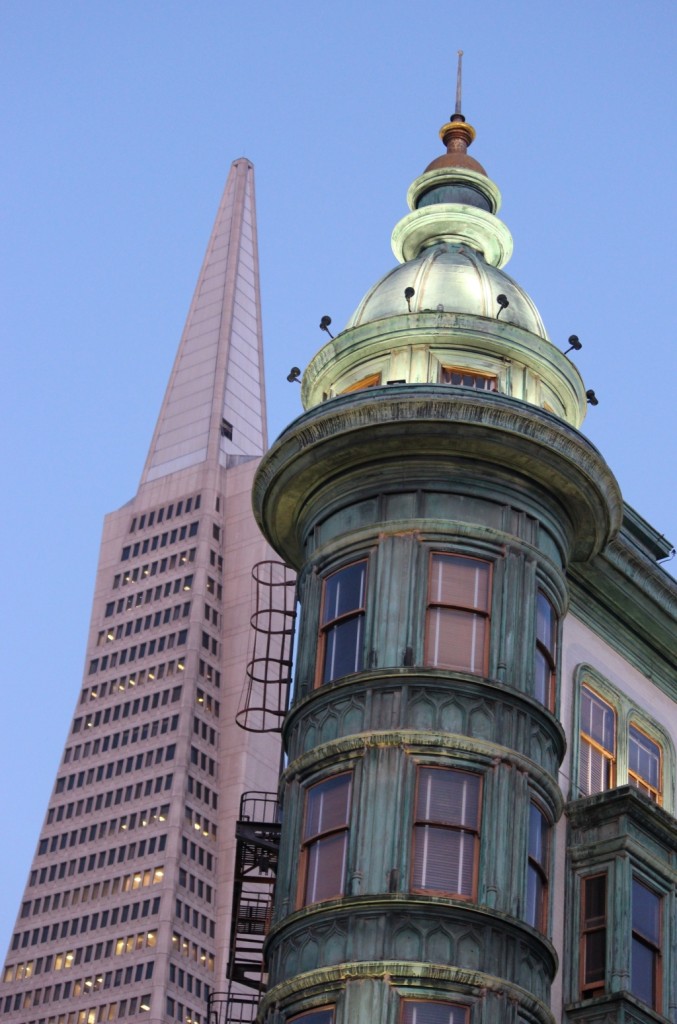 We returned to Birdy after our first day in the big city feeling as though we had left our hearts in San Francisco. The town had far exceeded our expectations, and we were thrilled to have two more days in this lovely city.

“I left my heart in San Francisco
High on a hill, it calls to me
To be where little cable cars climb halfway to the stars
The morning fog may chill the air, I don’t care

My love waits there in San Francisco
Above the blue and windy sea
When I come home to you, San Francisco
Your golden sun will shine for me” ~Tony Bennett

Isn’t California weather weird?! We were in Santa Cruz in July, and it was in the low 70s every day. We thought about going to Pinnacles NP since it was only about an hour and a half away….until we realized there’s really nothing going on there in the summer because it’s 100 degrees every day. I could drive the entire east coast without seeing that much of a temperature variation, I think! Great photos, as always :). Alcatraz is on our list of places we keep meaning to get to but haven’t quite made it to yet as well. I… Read more »

While in CA, we experienced high temps from 55 to 105, which was crazy. Definitely loved the San Francisco weather! Next summer, we are thinking we either need to go east next summer or high up in altitude, like Colorado. Thanks about the photos! Someday, we hope to return with those Alcatraz tickets in hand. We also didn’t make it to China Town or the Painted Ladies or on a trolley. We’ll just have to return!

Thank you Kerri for the beautiful reminder of my first trip San Francisco.

You are so welcome! Glad you enjoyed it. It is a beautiful place–no wonder Amanda moved that direction for so many years!

You are going to have to come back to California you know, right?

I know, I know!! We need to do a northern CA route and go up through Oregon, as well. Hope to see your beautiful campground in person some day!

Lovely post! Great photos. I loved the shot of the seagull with Alcatrz in the background. Fabulous shot! Also how one of your son’s thought (as I did) Grandma’s predictions was kinda creepy…. Hahahaha. Happy Trails! -Rainey

Thanks for stopping by, Rainey! We really loved San Francisco, even more than we expected to. Lovely city!