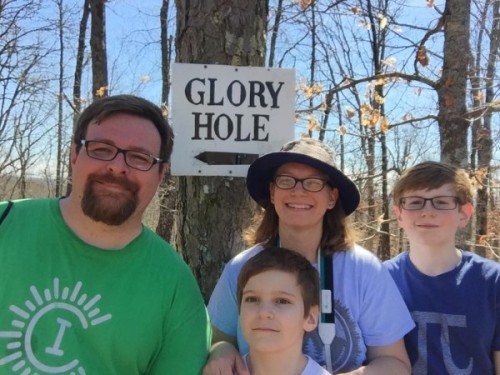 The first week of March brought snow to the Ozarks, which struck fear in the hearts of those of us with spring break the following week. We can never count on having spring-like weather for our spring break, which usually falls during the second week of March.

Luckily, despite the early March snow, we had some warm, beautiful days during our spring break and decided to take a day trip. Though we would have loved to take Birdy out for a trip, we decided it wasn’t quite time to de-winterize.  After seeing pictures from Glory Hole Falls in Northwest Arkansas from our adventurous friends, I decided this would be a good spring break excursion. As you know, we have greatly enjoyed hiking in Northwest Arkansas before.

The Glory Hole is a geological oddity: over time, a rollicking creek has etched a large hole through the top of a bluff, creating a unique waterfall in the cavern below. A 2-mile roundtrip trail takes hikers to the top of the bluff and then around to the cavern below, where they can see the circular waterfall pouring through.

Glory Hole is not part of a state park or an official destination, so it can be hard to find. It is part of the Ozark National Forest, so you don’t have to worry about trespassing on private land. We found some interesting directions for getting there on the Explore the Ozarks website, which tells you to pass a large barn and look for a small parking area. These descriptive directions are very helpful since there’s not much to let you know you’ve arrived at the Glory Hole, unless there are a lot of cars there, as there were the day we went.

The only signs marking the location are rudimentary, homemade signs:

As I mentioned earlier, we had received a good snow the week before our trip to Glory Hole. We had read that the creek runs better after a good rain, so we hoped the extra moisture would mean a good show at the falls. Unfortunately, we also discovered the extra moisture meant something else: MUD!

I had told my youngest son to wear his old shoes that morning, but he didn’t hear me, and instead wore shoes that were less than a month old. We started our hike walking very carefully, trying to avoid the mud, but as we trudged on it became apparent we were going to get muddy, very muddy. So, we had to just roll with it.

Even though it was too early in spring for the trees and flowers to be in bloom, we had a beautiful hike to the falls. The trail is mostly flat and very easy, until you get almost to the falls. Then, you have to navigate over some boulders and down some steeper passages. 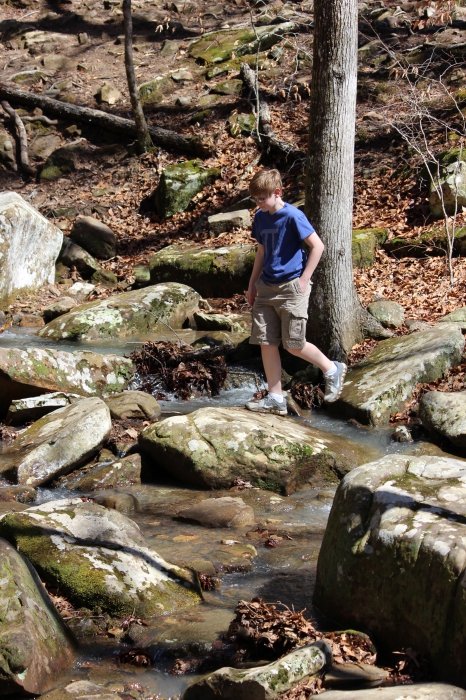 We didn’t catch it on camera, but the most memorable part of the trip was when I attempted to cross a small creek and slipped in the mud, landing squarely on my bottom. I had to walk around the rest of the day with my shorts caked in mud. 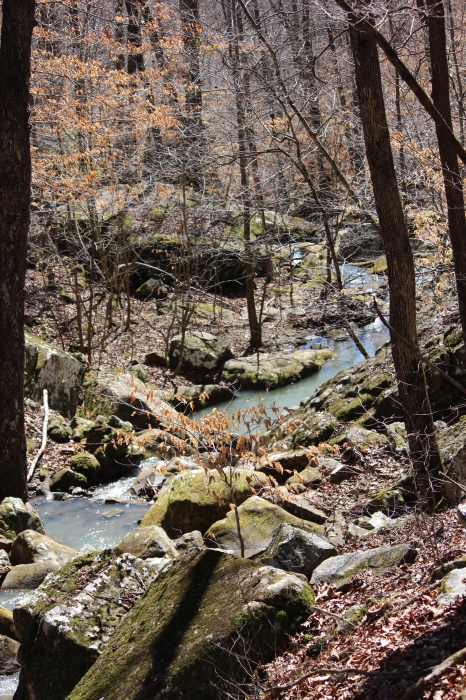 After hiking a ways, we arrived at a large stone overhang, where the creek suddenly disappears. It took us a minute to realize this was the top of the Glory Hole. We could clearly see a perfectly-round circle where the creek disappeared into the cavern below. This made us eager to hike the rest of the trail to see what we would find below.

We finally arrived and saw Glory Hole Falls in all its glory:

It was interesting to see but very difficult to photograph. Hikers can climb around the cavern behind the falls. We explored the falls for a little while before moving on, allowing others to see the area and take their pictures.

We rested and got rejuvenated for the hike back up from the falls. Though the trail had mostly been very easy, this part of the hike led to some whining from our younger son. We trudged up the hill, over and and around the boulders, and through the mud.

Overall, a great time was had by all. We were glad we were able to see the glorious Glory Hole, and we highly recommend this hike to families looking for a fun adventure near SW Missouri or NW Arkansas. Of course, there are many wonderful hikes in the area for more experienced hikers, but if you’re family is just starting out, Glory Hole Falls is an easy hike with a great payoff.

If you’d like to visit Glory Hole Falls, here are some tips:

1) Read the directions online, instead of just relying on GPS. When traveling out in the wilderness of the Ozark National Forest, your GPS may not work 100% of the time, so it’s good to have an idea of where you are heading.

2) Watch carefully when you get to the area since there are no official markers letting you know you are at the right place. If no one else happens to be there, you’ll easily overlook the small parking area.

3) Bring old shoes if you’re hiking after the area has received snow or rain. You will encounter lots of muds, as well as some small water crossings.

4) This isn’t a long hike, meaning you can explore other nearby areas and still make a day trip out of it. We enjoyed the Lost Valley Trail and the Buffalo River area on previous trips.
I wished we had realized we could have easily added a short hike to Triple Falls (Twin Falls), as well.

That was a great day. You’ve become quite the adventurer and I love it.