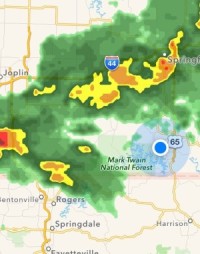 I tend to be a bit freaked out by severe weather. I have a weather alert radio in my bedroom and have been been known to throw shoes out of our front closet in the middle of the night so we could take cover. I was very thankful to move into a home with a basement so I could be less stressed during severe weather.

But then, I went on a spring camping trip in the Ozarks on a night with a tornado watch….

I had spent the day checking in on the weather and feeling a little anxiety about our upcoming trip to Branson, Missouri. I did reason with myself that tornadoes were very rare, even in “tornado alley,” the area of the US that sees the most tornados. Though the bottom portion of my state was all in a watch area, it would be very unlikely that tornadoes would develop in my specific spot. And, even when there ARE tornado warnings, of course, tornadoes very rarely hit the ground. So, I put on my big girl panties and went on my way.

Though my husband isn’t usually bothered by the weather, he did take notice of the watch, and together, we scoped out the tornado shelters when we arrived at the campground.  He was probably humoring me.  Since the activity was supposed to pick up around midnight, we decided to stay up and keep an eye on it. 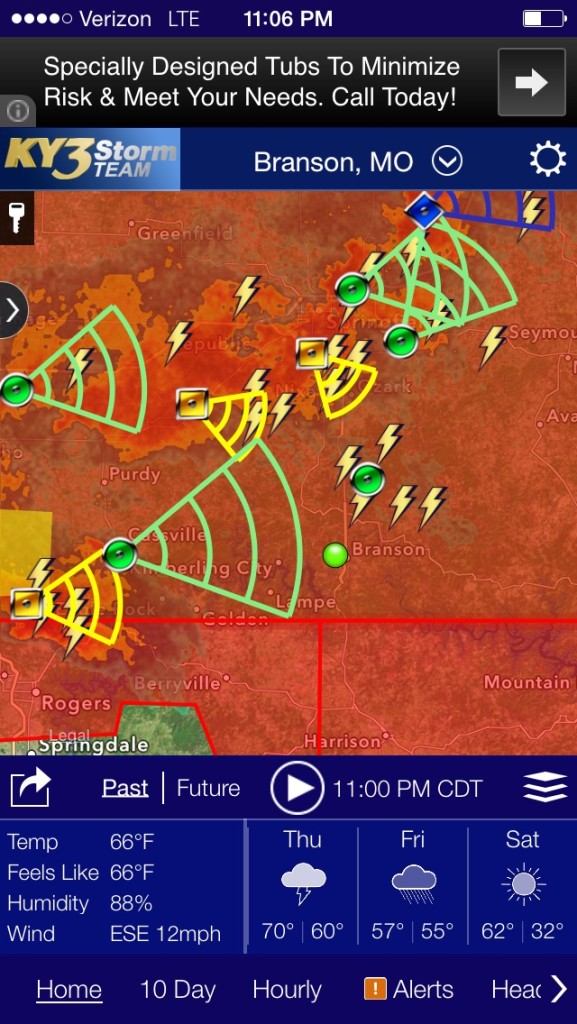 At fifteen til midnight, our phones erupted with buzzes alerting us that a tornado warning had been issued for our location. We woke the boys up and headed out to take shelter from the storm.

Earlier, we had noticed the laundry room was built into the side of a hill, tucked away below a ridge in the RV park, making it seem like a safe location. Above the laundry room was a large room with a TV, where we could watch the weather, so we went there first. While the rest of us were a little amped up about the weather, our younger son, Sam, fell asleep on the couch.

The weather report was making it sound like tornadoes were a definite possibility with this storm, so we decided to head down into the laundry room, which offered more shelter. Several other campers had already made the same decision. 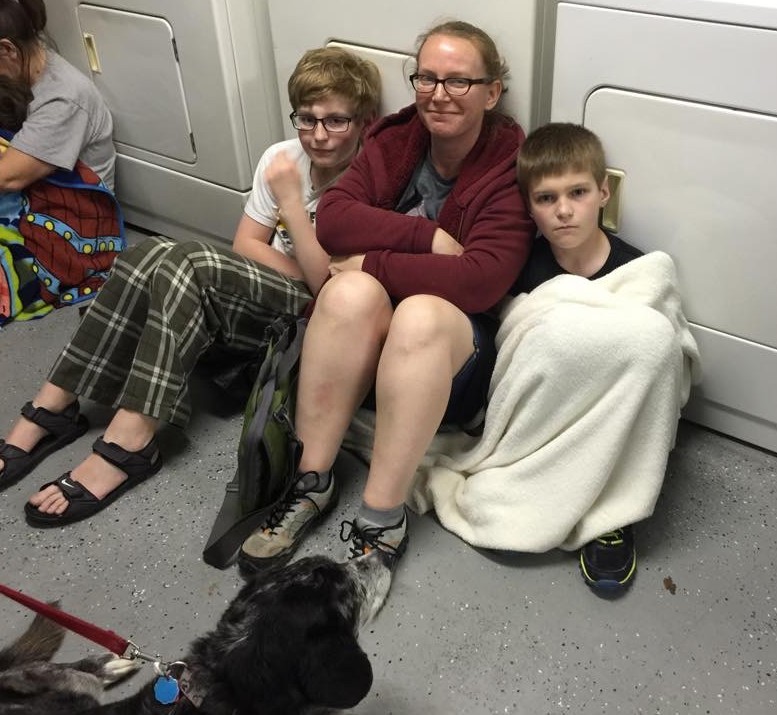 The boys and I decided to get comfy on the floor. We curled up against the washing machine and got a kick out of the dogs the campers were bringing into the shelter. As new dogs would arrive, the previous inhabitants would stand alert, growling and eyeing the new arrivals. Sometimes, they barked and put on a bit of a show before being chastised by their owners. One tiny dog was wearing a sweater that her owners called her “thunder sweater.” It supposedly calmed her nerves during storms. I wondered if they made those for humans…

We told our fellow storm refugees about the time my husband took our older son, Ben, on his first camping trip. Ben was four when I finally decided he was big enough to camp in the woods with his dad. They headed out to a nice location in the Mark Twain Forest, east of our hometown. I went out for dinner with my family, and when I returned home, I found a message on my answering machine from my husband that said, “There’s been a tornado.”

That was it. No further info because the pay phone went dead. My heart skipped a beat, as I called my husband to find out the story. He didn’t answer. I called him a dozen more times, but no answer. I turned on the TV to see that there was one single county under a tornado warning, which was the county they were in, of course, but there was no live update on the conditions.

I fretted for a couple of hours before my husband finally called. Apparently, there had been a freak storm that blew in and walloped their campground. My husband and son took cover in a restroom while tents were tossed by the wind, and limbs were blown down.

The boys decided to head home since their tent and gear were soaked, but they couldn’t exit the campground because a fallen tree was blocking the road. Eventually, someone with a chainsaw arrived to clear their way, and they headed home, calling me once they had a cell phone signal. I was quite nervous to let them camp again after that, but they eventually did.

This time, I was glad we were, at least, all together. As the storm began to bear down on our area, a manager arrived and informed us that we should move to a back storage room to get away from the windows. Despite the commotion, Sam still found a comfy spot to curl up for the duration of the storm:

Tucked away in the basement, we couldn’t hear much of the storm as it blew in. As the tornado warning waned on, it became clear that the worst of the storms went to the south of us and we were in the clear. We headed back to our camper around 1 am, glad that this tornado warning was a false alarm for our area. We learned the next day that a few tornadoes did indeed drop down in nearby communities.

Our storm shelter adventure definitely left us with a memory from our first trip in Birdy for this year.

If you find yourself facing severe weather while on a camping trip, here are some tips that helped us:

1) As you arrive in a campground, make it a habit to note what county you are in and ask about the park’s storm shelters.

2) Be sure your smartphone has weather apps that are set to alert you to bad weather where you are located, instead of just in your hometown.

3) For local weather, use Google to find local tv or radio channels. Some channels even have live audio or video feeds you can access from your smartphone or laptop.

4) If you head to a storm shelter, be sure to grab your smartphone charger, in case you are there for a while or in case a storm actually hits.

5) Taking a blanket to the shelter will give you something to sit on if there are no chairs.

Have you ever had to take shelter while camping?

You have to admit, the wild weather added an element of adventure to an otherwise simple trip to Branson.